Exploring the Universe with AR and VR 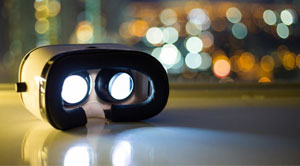 VR and AR technology will not only meet the imaginative demands of the space geeks but also help the space research institutes to train the astronauts.

FREMONT, CA: In the mind of every cosmological enthusiast is a hidden urge of traveling the vast exteriors of space, and exploring the infinite vista of heavenly bodies. But the limited physical parameters restrict the boundaries of imaginations and eventually destroy the surveying aspirations. As the space study was becoming increasing monotonous and the accumulation of educational appetite stacking higher and higher, the scientists and researchers were forced to undergo technological reforms. This innovative outcome gave rise to Virtual reality (VR), which initiated a domino of sophisticated applications in the entire industrial ecosystem.

Once created as an interactive multimedia tool, VR technology has now become an engineering marvel for space exploration and cosmological study. Today’s VR headsets allow the user to teleport inside an augmented 3D real-bound environment which not only facilitates the efficient research of heavenly objects but also satisfies the urges of space geeks. On the flip side, augmented reality technology superimposes the real world with synthetic objects and creates a space for an elevated experience.

Governmental agencies and private space companies are now undertaking the AR and VR technology to assist astronauts at the time of unpredictable and extreme conditions. Furthermore, the artificially inseminated atmosphere created by VR and AR technology can help to train the astronauts efficiently and in a cost-effective manner. With the integration of VR and AR in the space institutes, eliminates the use of heavy machinery, and reduces the maintenance cost to a minimum.

Zoom Around the Universe

Decades of imagery data sets collected by various space organizations are being used to manufacture environments having perfect resemblance with the real universe.  In fact, the use of AR and VR technology in the field of cosmology is much deep-rooted than we actually give credit for. Over the last four decades, The National Aeronautics and Space Administration (NASA) is using basic VR concepts to train workers and space-goers. Moreover, with sensory data, inventory information, and repairing protocols, the AR and VR technology has become a highly sophisticated guiding tool.