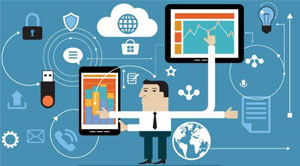 A study conducted by Bank of America revealed that 55 percent of the total mobile users sleep with their smartphones close by to avoid missing calls, text messages or any other updates during night. Post sleep, it’s again the mobile phones that they look for—first before anything.

On the other hand, Gartner reports says that more than 432 million smartphones were sold in the last quarter of 2016, out of which 352 million implemented Android software—a whopping 81.7 percent. As smartphones and tablets become constant companions and android being the most used in numbers, cyber attackers are using every avenue available to break into Android devices to gain complete access to critical information or install malware that draw data from mobile devices.

Besides Android being the most popular mobile operating system there is a continuous stream of security concerns along its usage. However, through constant upgrading and innovation the recent developments have improved the situation. Advanced features like full-disk encryption, restricted profiles, improved authentication and SafetyNet has robust capabilities to secure Android devices. But to be on the safer side, security managers should pay careful attention to the potential pitfalls that remain.

Mentioned below are the five Android device security challenges to focus on in the coming years:

With the diversity of its ecosystem, Android has bazillion of modified versions implemented on a significant number of devices for various applications—perhaps the biggest factor that incurred globally wide criticism for Android. As an open source OS, Android has created a nightmare for support and security staff more than anything else. Still, switching to other platform does not work as Android’s popularity among users has already become in-eliminable.

The best solution to this problem—Android fragmentation, is to limit the number of devices and operating system versions allowed , whether or not they are issued by corporate offices or BYOD. Initiatives in this vertical can facilitate robust IT control over Android systems management and security among its users.

Viruses, worms and other malware issues are as common as it can be where software is involved. As in the case of Android, the most effective solutions to such issues are implementing robust mobile application management systems. This can prevent any infected app from contaminating an entire device. Before deploying any management product, IT managers should see that acceptable use and security policies that align well with the organizational objectives need to be incorporated. There are a number of anti-malware apps available in the market. Though their effectiveness is controversial, vetting carefully before deployment can produce positive results.

To effectively improve Android device security with regards to their content, application and identity management features, enterprises can engage efficient Enterprise mobility management (EMM) suites. IT managers need to focus on key elements like cross-platform support to manage multiple Android releases and EMM’s integration capabilities with other operational management systems. This approach can maximize IT productivity and also avoid overlapping or conflicting features.

User behavior can solve a lot of security issues. Guiding users to comply with straightforward policies, which are usually simple, can avoid encroachment of unwanted software or malware into their devices. Users while using apps, they should ensure that beyond simply ignoring permissions notifications, they should try to identify what data, device features and other apps that their app in use is accessing. Today, mobile content and application management has become more critical than ever before to control the flow of data among apps. Additionally, users need to blacklist third-party apps without fail.

Compartmentalization of apps is effective in limiting security problems. This is where EMM plays the central role in encouraging good organizational security practices. Organizations can implement varying levels of clearance within their workplace ecosystem. It is now increasingly used in varied line of business including commercial security engineering to protect sensitive data like medical records and bank transaction details.

As the fact remains true that there is no such thing as absolute security, users as well as organizations should cooperate with the Android community’s constant efforts to make successful security progresses. The various benefits that open source nature of Android provides make it worth going the extra mile to ensure security.