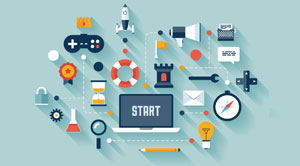 An air of mystery surrounds the blockchain technology; still, many elements of the technology have been integrated into mainstream enterprises. People believe the blockchain platform will play a huge role in future innovation but are unaware of its present potential.  Cryptocurrency is all over the news, yet many of the discussion centers around whether or not ICOs are stable and sound, despite its substantial revenue returns. The technology is stable enough for currency and data-exchange platforms, but a sophisticated app can help bring shine a light on this technology for the masses. Enhancing the platform through an app will simplify it and build a path to understanding the intricacies beneath it resulting in less speculation and the platform’s growth.

What is that killer app?

To power such an app, there are many possibilities available that transform buzzwords into everyday terminology. Cryptocurrencies such as Bitcoin to ICO and the idea of self-sovereign identities, which provide a person with the agency over their own identity, are some possibilities. However, cryptocurrencies, ICOs, and identity verification are too weighty topics and is not the goal of a killer app to reach the masses.

Cryptokitties, a game powered by ERC721 with a new token standard allows users to create unique digital assets that as long as the market bears can be sold at any price set by the owner. Each asset can be assigned unique characteristics, which then affects how it interacts with other assets. The elements that are communicated there include a unique and immutable token, permanent record, and unique characteristics that affect its interaction with other assets. Despite its simplistic user interface, the game had users creating wallets, utilizing cryptocurrency and using a form of sovereign identity.

The future of Cryptokitties is unsure because it struggles to scale after its unexpected massive launch, but it features blockchain in an elegant and fun way. It is undoubtedly paving the path to better blockchain based app.