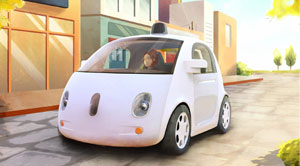 FREMONT, CA: Google will soon become a car company by introducing its Self-Driving Car to market. The company recently has tested its first prototype successfully with no steering wheel and pedals.

Google has improved the model from its earlier release. The model looks like rack-mounted prototype attached with addition of Light Detecting and Ranging (LIDAR) system, RADAR and camera equipped thimble-shaped peduncle at rooftop. The company also adds two real headlights.

The Google car is built on software platform which can be controlled by central computer that helps the model to achieve the speed over 100mph and to interact with other cars and existing transportation infrastructure in future.  Also, the inbuilt software can be updated any time, eliminating the need of forward-facing seats, mirrors and foot-operated controls.

The autonomous car can predict a relatively low-speed world of mobility, deal with complex urban environment and maintain steady speeds according to the surroundings. The car avoids traffic rush and prevents itself from any unexpected accidents which mostly occurs due to human errors.

The electric motors of the autonomous car are simple in design with less maintenance required. The components can be easily fixed in no time when needed, as reported by Matthew DeBord from Business Insider.

Besides all its significant functionalities, the Google car has to deal with few challenges as well, such as: determining the enforced traffic laws; what needs to be done when computer freezes or is hijacked; the car should be completely driverless or one licensed driver should be inside. Despite these questions, the Google Autonomous Self-Drive Car will be safer than any human-driven car.