How are Drones Used Today? 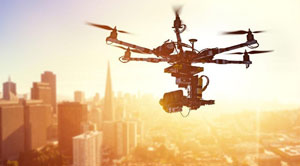 Drone technology has made its way into a variety of industrial domains today.

FREMONT, CA: Technology is today flying high in the sky. Drones are increasingly being used by almost every industry. These intelligent pilotless aircraft may still be in the stage of infancy when it comes to discovery and developmental aspects of their commercial and practical application. But, they are adopted massively by a wide range of industries. In the past years, drones were limited to a specific predefined set of uses, such as army applications, fire extinguishing, and aerospace. With the advancement in the technology of drones, technologists are tapping into the unexplored use cases of drones in order to help a multitude of industries.

Drones are enormously used by the military. Be it defense or target missions, these unmanned aerial vehicles (UAVs) have won the trust of the military professionals greatly. Drones are also used in research and development, target decoys, supervision in the field, and more. They have become a pivotal part of the military forces across the world, lately.

The commercial drone industry is blooming up yet. A lot of technology firms, IT consultants, chip companies, and electronics and mechanical technology companies are increasingly funding commercial drone makers. Technologists are focusing on customizing commercial drones. This, in turn, brings newer functionality into various niches that are widely rife of applications of the drone. The operational ecosystem of drones can be personalized for agriculturists so that drones can take over tasks such as irrigation, fertilizing crop fields, measuring crop yields, and harvesting. The construction industry can use drones to survey the construction site, report the status of work and workers, and more. Interestingly, drones are also used to deliver pizzas today.

There are countless uses of drones, and technologists, and engineers are uncovering more of them. And the commercial drone industry is yet to unlock the ripe future.