Craig Corbin, Director of IT, Fontainebleau

How can the use of NavCog Benefit the Visually Impaired at Airports? 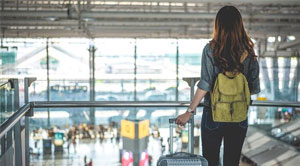 Independence is most important for any individual, and technology plays an essential role in helping people become more independent. Despite having many challenges, we keep working to make it easier.

Fremont, CA: Mostly, people prefer airways, it being the easiest way to commute. However, navigating airports might be a challenging task for visually impaired individuals. To help mitigate this issue, a Carnegie Mellon University professor, who is visually impaired from the age of 14, has started a navigation app, which provides turn-by-turn audio instructions for users.

Collaborating with other researchers at the university, Professor Chieko Asakawa developed an app NavCog for Pittsburgh International Airport. NavCog works almost like an indoor GPS and allows the users to do mostly everything, such as finding a gift shop or a café to wander around for some time. The app works with the help of hundreds of Bluetooth beacons that are installed in the airport and wirelessly communicates the users’ location. NavCog is publically available and free to download.

Other than providing audio instructions like “walk 20 feet and turn left,” the app also informs the users what stores they are passing, providing a detailed sense of the surroundings and shopping options. It turns out that Pittsburgh is one of the only airports to offer such apps worldwide. Louisville International in Kentucky had installed a similar app in 2017, which was created by the American Printing House for the Blind.

The most significant setback of such apps is that it requires a smartphone in order to use them. The blind population consists of older people and has a high unemployment rate, which results in many not having smartphones, making these apps inaccessible.

Check This Out: Top Travel and Hospitality Tech Companies

Ruckus Networks: Redefining Connectivity in the Realm of Hospitality

Uptown Network: A Startup is Surprising with Success in the Industry's Top Hospitality Brands

Pegasus Solutions: A New Chapter in a Long Legacy of Innovation for Hoteliers

tracNcare: Heralding a New Era in Asset and Guest Management

CSI Enterprises: Replacing Paper Checks, One at a Time

Odysseus Solutions: The Trojan Horse of Travel and Hospitality Industry

ABC Connection: The Economics of Digital Marketing for Hospitality