How Does a Silicon Valley Company Help Address Housing Crisis? 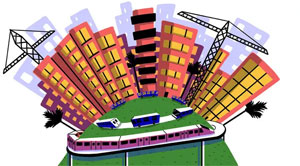 The people in the Bay Area are facing severe housing crisis because of the dwindling affordable housing.

Fremont, CA: MainStreet, a San Jose-based company, started by three former Google employees plan to create 1,000,000 new jobs and opportunities in suburban and rural communities in America over the next decade. As a temporary incentive, the company offers $10,000 to qualified applicants. This is to address the present housing crisis in the Bay Area, where affordable housing has dwindled. The high cost of living is a huge problem there that families who lived in the area for decades are now being priced out of their homes.

MainStreet looks forward to multiplying the number of companies allowing remote work, thereby fulfilling its goal of creating jobs while lending hands to address the housing crisis. Many tech companies are paying well to their workers to push out low-income and middle-class workers.

According to CNN, Apple has recently announced a $2.5 billion financial package to help address the housing crisis in California. Google has invested $1 billion to redevelop company-owned land for constructing affordable houses while developing a fund to incentivize developers to build affordable houses. And, Facebook CEO Mark Zuckerburg has helped raise $500 million to support an investment fund he helped launch called Partnership for the Bay's Future.

Companies are now working with MainStreet to recruit and train employees who are willing to move out of the bay area and work remotely. These employees will undergo training on tools such as remote video conferencing for communication, and will work out of the satellite offices known as “MainStreet communities.” Here, the workers are made to work with the remote workers who are from other companies to reduce the isolation that many workers may feel. MainStreet will handle the logistics and training to make them work remotely. The remote workers play a pivotal role in “the future of work.”

The benefits derived out of remote work include employee satisfaction and a higher quality of life by boosting the local economy. Furthermore, MainStreet is guaranteeing stipend up to $5,000 a month for consequently three months and health care benefits if they lose their job.

Salelytics: The Dawn of a New Era for Sales Technology

Quip For Salesforce: Transforming How Sales Teams Work Together