How Drones are Not Always Humans' Best Friends? 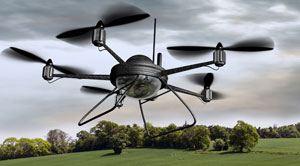 Drones are the new evolving trend among all the sectors. Although many people are exploring the vast potential of this new technology, some issues pose a big question mark on its utilization.

FREMONT, CA: Drones, also known as Unmanned Aerial Vehicles (UAVs), are aircraft that can be pilot-controlled or pre-programmed to fly autonomously. This technology is being embraced by a large number of industries, including state, military, commercial, and recreational users.

Drones or UAVs carry digital imaging technologies, communication programs, and other components, making it a multifunctional system capable of performing a wide range of tasks. It is also, however, the source for a number of debates on its legal and ethical issues.

Drones are highly vulnerable to collisions. If not given legitimate training and learning with respect to flying a drone or programmed mistakenly, the UAV may crash or can demolish something or hit somebody. There have been numerous episodes in the past where drones that fly near airports have presented a severe danger of collisions and UAV crashes, causing injury to a number of people.

Drones are sensitive to illegal objectives of hackers due to the convenience and accessibility of the drones. Criminals and terrorists can take advantage of them to invade their privacy or target populations.

There are many reported episodes of creatures attacking the drones mid-flight. This presents a critical danger to the creature as well as whoever or whatever is beneath the UAV. A quadcopter was attacked by a red-tailed hawk in Cambridge, Massachusetts, in 2014. Afterward, its video from experience turned into a web sensation.

The rogue drones can harm individuals, for example, when a UAV rushed into the crowd during a sports event in Australia. There have been episodes in which drones were carrying radioactive materials for people doing unlawful exercises. Unless regulated, the wrongdoers can misuse this technology easily for malicious purposes.

It is probably the number one issue associated with the use of UAVs. It is frightening and distressing to think about drones monitoring around and trespassing on one's property. It can be used to keep an eye on individuals to dispense data without even them seeing it. In fact, paparazzi agencies have begun using hi-tech drones to eavesdrop on renowned personalities.

The drones came as a blessing, but at the expense of specific threats. A regulatory mechanism is essential for keeping its misuse at bay. Proper laws on the use of drones and the misuse of their technology should be passed.