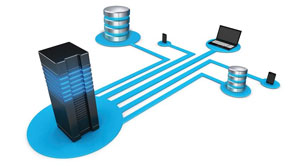 With organizations piling up information, IT departments are developing various methods to amalgamate storage and utilize each storage unit efficiently. Schemes like thin provisioning and tiered storage work quite well, but managing all those devices with huge data can soon become a headache. To handle these enormous data efficiently, storage virtualization lend a hand providing a way to combine all those drives into one centrally manageable resource. Even though storage virtualization is still early in the adoption curve, it's gaining traction among the ITs.

The complexity and difficulty of managing multiple storage devices has forced IT managers turn to storage virtualization technology. Storage virtualization is literally the process of grouping physical storage from multiple network storage devices to mimic it as a single storage device. The process generally involves abstracting and covering the internal functions of any storage device from a host server, host application or even a general network in order to facilitate the application and to perform network-independent management of storage. This virtualization can be adopted for any level of a Storage Area Network (SAN). The virtualization techniques can also be applied to different storage functions like physical storage, (Redundant Array of Independent Disk) RAID groups, LUN subdivisions, Logical Unit numbers (LUNs), logical volumes, and storage zones.

• Block-Level – This method of storage virtualization includes the abstraction or separation of logical storage from physical storage to grand access without considering the physical storage or heterogeneous structure. This separation offers greater flexibility in managing the storage for end users. This type of system replaces controllers and takes over at the disk level while initializing virtualization before the file system exists.
• File Level – This method can be adopted to tackle the Network Attached Storage (NAS) challenges by eliminating the dependencies among the data accessed at the file level and the exact location of the physical file storage. This can also provide opportunities to optimize storage use and server consolidation to perform non-disruptive file migrations.

• Host-Based Storage Virtualization – While the host operating system should have an installed driver to intercept and redirect IO requests, additional software running on the host, as a privileged task or process are required to implement host based storage virtualization. Volumes or LUN's presented to the host system are handled by a traditional physical device driver. However, a software layer or the volume manager residing above the disk device driver intercepts the I/O requests, and supply the meta-data lookup with I/O mapping.
• Network-Based Storage Virtualization – With network-based storage, a fiber channel switch is placed between the host and the storage that virtualizes and redirects all IO requests. Even though the Operating System is not a factor influencing network-based storage, the switch and storage arrays must be compatible with each other.
• Array-Based Storage Virtualization - A single master array handles all the IO requests for all arrays in the system in this type of virtualization that allows flawless centralized management and data migration.

The Benefits of Virtualization

Storage virtualization can cover the complexity of a SAN by pooling together multiple storage devices. The Storage Virtualization software can not only reduce costs but also help with overall storage infrastructure problems. With virtualization, users need not worry about the physical data allocation. To the user, simply retrieving a file that is stored virtually is similar to retrieving a file on the local computer. Some technologies even optimize the storage performance by migrating data strategically based on the utilization. For instance, frequently used files could be stored on a high performance flash storage system while rarely used files will be placed simply on a slower array. While users are able to move a running application between servers in virtual environments, traditional, fixed storage systems will find it difficult to go along with the change.

The centralized management that uses a single central virtualizing controller allows the users to allocate, manage, and view storage from a single interface. In addition, downtime is minimized, and oftentimes eliminated. Indeed, it is even feasible to migrate the data without downtime using automation and software RAID mirrors. Some of the highlighted benefits of storage virtualization include:

• Repossession of Storage Capacity: This makes the unused capacity available to any servers, users or applications accessing the general pool. When storage is no longer required, it turns to be a part of the pool again and could be adopted elsewhere.
• Storage Management: Storage virtualization can help eliminate multiple tools and processes for different types of storage arrays and media. While consolidating storage management allows easier and efficient management, it also helps avoid both human and administrative errors.
• Superior Storage Management: Implementing virtualization can also extend the useful life of storage devices, also maximize the return on investment, and potentially delay, additional storage purchases.
• Energy-efficient:  As helping improve disk utilization, storage virtualization also reduces the number of physical machines while concurrently reducing data center floor space, cooling requirements, and the power consumption as well.
• Data Migration: With storage virtualization, data can be moved non-disruptively and even automatically with some systems, between storage tiers, further reducing hardware infrastructure expenses.
• Reduced Capital Expense: A virtualized storage environment can replace the fragmented, dedicated DAS, SAN and NAS topologies with a centralized and more flexible storage pool saving the capital expenses.

There are quite a few different approaches to Storage Virtualization today. One of the virtualization methods might denote clustering the whole storage into a big virtual storage pool and stipulating to a server, which handles the provisioning of storage to other servers. However, the method of virtualization does not matter; the main difference is the scale. Storage vendors are also promoting virtualization for the next gen data centers to exploit storage resources, gain flexibility, and lower the cost of managing while increasing amounts of data.