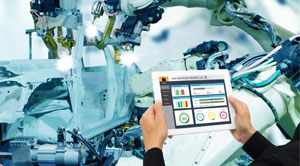 With the rise of 21st-century upheaval of Industry 4.0 also began. Industry 4.0 is a term given to current assembling in the industry. The term alludes to the fourth mechanical upheaval, utilizing the cyber-physical framework which is believed to advance personalized healthcare, traffic flow, delivery, logistics and transportation, and many other areas just being envisioned. Internet of things or better known as IoT also has a major role play in this with internet of services as an another attribute of industry 4.0

The fourth mechanical upheaval focuses over innovative progression both in the physical and advanced web world. Cyber-physical system also came into existence under this revolution which uses the web as a primary medium to share and gather information. The key attributes of industry 4.0 are listed below that makes it stand out from Industry 3.0.

1.  Cyber-Physical System: It is an electro-mechanical system that is controlled computer-based algorithm. The gadgets within the system are always connected to a network and have computer correspondence capabilities.

2. Internet Of Things:  Many are familiar with this, it is basically a system of physical things that utilize sensors and actuators to capture the information to trade it over the web. In other words, the items come together and gather vital information and exchange of this information is done over the web.

3. Industrial IoT: When IoT gadgets were got blended or incorporated with the assembling scene they were found significant and were made to be used at the industrial level. This gave rise to a new terminology known as Industrial IoT.

The global industry 4.0 already has marked its presence in many industries and is still growing at a rapid pace. It is the need to understand its importance and incorporate this into the business models. It is a system that comprises of big data analytics, robotic control and automation. The adoption of IoT gadgets offers growth opportunities for market players. With the introduction of 3-D printing the, manufacturing industry also has seen major changes and also has opened doors for new talents and ideas in the future. Industries and sector that are still uncovered under the global industry 4.0 will also witness an upheaval, which will change the workflow and business models completely.