IoT: The Pillar Behind Smart Airports 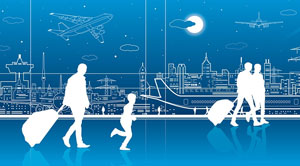 Though the awareness of IoT across the aviation industry is high, the knowledge on how to harness and gain from the IoT’s potential remains low.

FREMONT, CA:  Airports help billions of travelers across the globe with their journeys. It works on an infrastructure that is critically dependent on interconnectedness. Surprisingly, many of the airports are yet to incorporate the culture of digital connectivity within their infrastructure. A connected or a smart airport in popular term provides a platform for a variety of technologies to interact through the internet of things (IoT). The purpose of a smart airport can range from strategically differentiating an airport, by tapping into monetary benefits through greater efficiencies, improved traveler experience, to generating new revenue streams. To achieve such a goal, it is essential that the stakeholders and airports collaborate and design implementation strategies.

Though the awareness of IoT across the aviation industry is high, the knowledge on how to harness and gain from the IoT’s potential remains low. According to a survey, only 12 percent of airport representatives stated that their organizations were ready to benefit from IoT applications, while another 10 percent reported that they were not even exploring the possibilities of IoT.

IoT architecture is more than the sum of its components. The major challenge here is how to bring various technologies together to add value to the airport and its proceedings. Here is an example to understand how the technologies can be combined to add value:

Suppose an airport has to locate its non-motorized ground service devices. GPS tags affixed to the equipment, acting as a sensor, will create a thread of information over the location. The central server is informed about it through several radios. The server collects the location of a cart with type, location, and maintenance schedule for all the other carts. The entire data set is analyzed to design a plan to decide upon the cart that needs to be retrieved next and undergo maintenance. Based on that information, workers respond, enabling the right pieces of equipment for maintenance on time.

Thus the workers contributed to add value to the system with the help of IoT devices. Again, the essence is not the individual IoT device, instead the flow of information across the network.