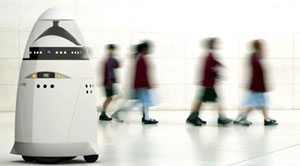 Another report by Allen McDuffee for The Atlantic says that the Knightscope K5 robot uses autonomous technology platform to combine robotics, predictive analytics, and collaborative social engagement to observe as well as predict crime.

The nexgen security guard has been installed with four cameras at the circumference of the bot and automatic license plate recognition (ALPR) camera to observe its surroundings. The robot collects important real-time, on-site data through directional microphones and multiple sensors such as thermal imaging sensor, infrared sensor, radar, Light Detection and Ranging (lidar) device, ultrasonic speed and distance sensors, air quality sensor, a global positioning system (GPS) and optical character recognition technology to predict threat in the area, as reported by Bridget Borgobello from Gizmag.

Once a malicious activity is detected the robot produces an intense screeching alarm to call a security guard or the police and send a notification to the community and authorities through the Knightscope Security Operations Center (KSOC), a browser based user interface. Apart from these features, Knightscope K5 robot can also transmit live video and tracks other K5s nearby through wi-fi system.

Knightscope K5 will be first used in private sector and the developers are hopeful that it will be adopted by public law enforcement as well.