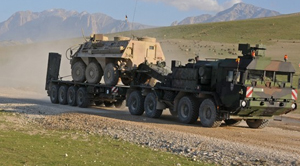 The test involved robotic, driverless military tactical vehicles moving carefully around obstacles like traffic, intersections, pedestrians in downtowns and rural areas wherein it proved to be successful. The hardware was able to take the heavy-duty transportation vehicles through the scenario, as a human would, states the report.

The AMAS software uses high-tech LIDAR, a laser-based guidance system, a GPS receiver, and advanced algorithms creating a virtual sense of keeping track of the surroundings. This software can be installed in almost every ground vehicle and while demonstrating, it was integrated on an Army M915 truck, one of the most utilized ground vehicles on the battlefield. Senior Army leaders from multiple Army divisions and TARDEC (Tank Automotive Research, Development and Engineering Center) were in attendance to observe the demonstration.

“The demonstration substantially improves the Army’s determination to integrate enhanced mechatronics into their robotics systems and soldiers fighting on the battlefield will now have a futuristic edge to assist them in their endeavors,” says Bernard Theisen, technical manager, TARDEC.