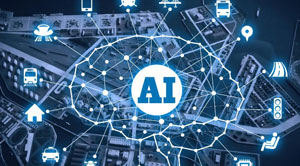 Since 1950, the concept of AI, user worldwide believed that slowly machines would start performing tasks intended for machines. Over the years, AI has evolved to be the biggest and most influential proponent for today’s mobile environment. By contrast, AI can make decision-making faster as it is able to provide intel about a user’s most personal device at the exact moment of interaction. IBM’s new initiative- the IBM Watson- has become the hallmark of a new beginning.

Around the end of 2016, Forrester claimed that AI could be the driving force of future mobile ads that works faster, and often delivers better results for the ad buyer. Furthermore, the concept of using a personal assistant to help tackle everyday tasks is attracting users globally. However, the potential for smart apps expands far beyond digital assistants. Today, most of the developers are harnessing the potential of AI in mobile applications for improving user satisfaction.

In the developer's view, AI enables to create innovative features in software ranging from entertainment systems to smart and advanced enterprise applications. Developing an efficient AI assistant involves the use of software tools. In fact, they are identical in structure to neurons in the CNS. In addition, these tools are capable of remembering and processing any previously received data. They can also analyze and apply the data in future practice.