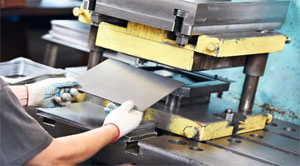 FREMONT, CA: The demand for metal sheet in industries such as automotive, consumer electronics and industrial machinery has increased since past few years. Development of hybrid electromagnetically assisted sheet metal stamping technology has triggered the overall growth of the industry. In a recent survey conducted by Grand View Research, the growth of metal stamping market is estimated to be worth $180Bn – between 2015 to 2022.

The metal consumption patterns in emerging economies have influenced the growth of metal stamping industry. Previously, heavy industries have been dependent on steel, cast iron, aluminum and titanium for manufacturing & assembling various machinery, equipment and tools. But now to improve operational efficiency and reduce operating costs, end-use industries are heavily relying on metal sheets. With the rise in consumers, the need for efficient metal stamping machines for improving operations has increased. Such a scenario has made companies to make investments in Research and Development (R&D) to stand up to the expectation of consumers.

Blanking, embossing, bending, coining and flanging are the major processes of metal stamping process. Due to favorable government initiatives to fuel industrialization, developing markets such as Asia Pacific and Central & South America are expected to witness substantial growth over the forecast period. Among all the processes, blanking dominates the global market followed by embossing and bending.

As metal sheet stamping is used by automotive industry to manufacture most of the automotive body panels such as door, bonnet, tailgate trunk lid, hood etc, the demand for metal sheets is likely to increase. The rising demand for consumer electronics on account of rising disposable income in emerging economies is expected to fuel market growth over the forecast period.

Further, the report highlights that with growing infrastructure activities and industrialization particularly in China and India, the Asia Pacific region is expected to dominate the industry over the forecast period. A significant growth is expected to take place in North America during the forecast period due to the rising demand from automotive industry for non-ferrous materials instead of ferrous materials to reduce the weight of the vehicles. Growing demand for from aerospace, aircraft and defense industries owing to rising use in aircraft construction in the region is expected to propel more demand.

Along with indicating the growing trends and areas in the industry, the survey has highlighted the fact that usage of polymers in the automobile industry is anticipated to hamper growth of metal stamping industry in the near future. The research has also revealed that replacing of metals with polymers in order to reduce weight and increase fuel efficiency of the vehicle is going to affect metal stamping industry.

Check Out: Metals and Mining Review