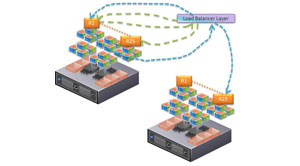 Instantly after Martin Fowler and James Lewis in March 2014 released an article on microservices, a wave of murmurs sluggishly highlighted the similarities between microservices and Service Oriented Architecture (SOA). While advocates of microservices or microservices architecture (commonly abbreviated as MSA) outright reject its connection with SOA, others believe it is just a revamped version of SOA architecture, which had stirred the application development landscape for first few years of this century.

Although there are striking similarities between the MSA and SOA, both of these architectures vary distinctively. Typically, SOA focuses on imperative programming while MSA concentrates on a responsive actor programming style. SOA models tend to use outsized conventional database, whereas MSA, most often, optimizes NoSQL or micro-SQL databases. Furthermore, MSA embeds faster messaging services, which its alleged predecessor (SOA) lacks, as it is asphyxiated by the web of dependent ESBs.

Whether or not MSA is a scion of SOA is a debate for another day. We will look at the relation between MSA and cloud computing and the contribution of the former in the cloud application development realm. To understand why MSA and cloud computing are closely knit, we have to dig deep and ascertain the correlation between the two. First off, let us begin with the basics of microservices.

What is microservices architecture?

MSA is described as an approach to build cloud application where each application is broken down into set of services. Each service runs its own set of processes and interacts through lose coupling of application programming interfaces (APIs).

Services are built to cater to specific business needs and can be written in any language; they are independently scalable, upgradable, and deployable. When an application is split into many components, any service-specific change doesn’t impact the entire application; instead, it impacts the particular microservice. Similarly, each service can scale up or down independently in response to demand without consuming additional resources.

The emergence of microservices ascribes to explosion of data coupled with a burgeoning demand of ‘one-click-away’ user experience, which has forced organizations to revamp application development architecture. Conventional monolithic application development design lacks flexibility and creates silos amongst various development teams. Most often, compiling issues are not discovered until the last moment, which then delays the release. In today’s fast paced world where millions of devices generate petabytes of data and consumers demand varied, fast, and on the move services, the traditional methods of application deployment isn’t going to suffice. Microservices, therefore is quintessential in breaking down the monolithic silos and help build agile application development architecture.

Merits and Demerits of Microservices

In the application development sphere, microservices have been popular for their revolutionary outcomes such as breaking down monolithic silos, on demand infrastructure provisioning, lessening release time. There are numerous advantages that set microservices apart; some of them are listed below:

Demarcation of Roles: With microservices-driven development process, developers can concentrate on specific services and enjoy the prerogative of developing the service in a language of his/her choice. This reduces the coordination hurdle that conventional development methods encounter. In microservices architecture each service development team is the owner of that particular service and is held accountable for any disruption within that spectrum.

Facilitates In-time Release: As each set of services are developed and maintained by separate, dedicated teams, deployed independently, and then connected through lose coupling of APIs, the in-time release of an application is quickened through microservices based approach. Although, microservices offer unique solutions to fill the voids in the application development landscape, its granular and distributed nature often poses few challenges.

Integration and Interdependencies: Though the set of services that an application is broken down into function independently, there can be dependencies amongst each service’s functionality. This limits the scope of application development by forcing organizations to develop composition of services that can deliver a specific business goal.

How are microservices and cloud related?

After we have established the basics of microservices, and discussed its merits and demerits along with the IT operational shift, now the relation between microservices and cloud can be outlined. Cloud computing and virtualization have been making headlines for more than a decade. The often talked about aspect of cloud is its horizontal scaling capability that offers significant benefits. Leveraging microservices in cloud realm bolsters horizontal scaling and assists in developing application that ingrains demand-specific scaling capability. With data explosion and increase in number of connected devices, the complexity associated with application development also has seen a steady increase. Microservices can assuage complexity concerns with its scaling ability and by limiting wastage of resources. In addition, microservices also can augment API call efficacy in a cloud environment by introducing the call as a new feature within the application.

Therefore, we can infer that microservices can be the harbinger of efficiency in the cloud computing ecosystem. Hence, it is crucial to strike a right balance between cloud and microservices based architecture to harness agility, scalability, and flexibility.