Microsoft Hyper-V and the Realm of Virtualization 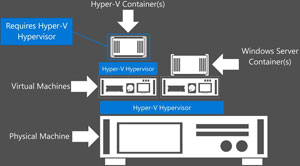 Virtualization abstracts hardware that allows multiple operating system instances to share a set of common physical resources. Virtualized hardware may contain a variety of OS instances while maintaining complete isolation from each other; it also enables free migration across other virtual machines, and scale as and when required. Virtualization had been around in the IT world since the 1960s, however, due to the absence of personal computers those days, the concept did not gain much traction. With the advent and proliferation of personal computers post-1990 era, companies realized that adopting virtualization could actually be a cost saving option. In the light of all these development, Microsoft too developed its flagship hypervisor for windows server environment called Hyper-V hypervisor. In this article, we will have a closer look at Microsoft's hypervisor technology.

• Hyper-V runs multiple operating systems simultaneously on one physical computer and also create and manage virtualized machines’ resources at the same time.
• Each virtual machine is isolated, virtualized computer that has the capability of running its own operating system.
• Hyper-V hypervisor framework provides virtual infrastructure in which applications and workloads of varied business goals can be accommodated. This augments efficiency and reduces overall operational cost.
• Hyper-V hypervisor’s services extend to cloud computing as well. The hypervisor assists in moving or expanding shared resources in a private or hybrid cloud platform, as and when required.
• Hyper-V hypervisor enhances continuity of business by minimizing the impact of scheduled or unscheduled workload downtimes.
• A centralized desktop strategy is realized with Hyper-V’s capability to establish or expand virtual desktop interface (VDI). This can help a business to increase agility and data security.
• Microsoft Hyper-V allows user to create, change, or delete virtual machines, while it enables them to enhance virtual networking efficiency and perform additional dependent operations.
• By creating virtual machines, we can emulate different computing environments for software testing without procuring the hardware that is otherwise needed.

Though Hyper-V has attracted significant attention of the enterprise world, VMware vSphere still gives tough competition as more organizations incline toward VMware for their virtualization needs due to its highly scalable and flexible capabilities. Additionally, the version 6 of vSphere hypervisor provides a plethora of customizable and highly scalable features making it an attractive choice for organizations adopting virtualization.

Virtualization has emerged as a one-stop solution to drive the efficiency in compute and storage. However the success in this realm requires aligning the business goals to the right virtualization configuration in order to achieve better business outcomes. The popularity of both vSphere and Hyper-V speaks volume about their innovative product design and quality which attracts a broad user base with passing time.