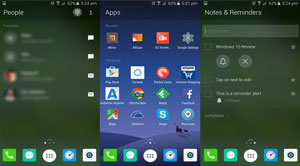 FREMONT, CA: Microsoft has introduced its latest Android app launcher – Arrow which completely revamps the Smartphone’s homescreen and changes the wallpaper. Currently the app is in private beta stage, meaning the app cannot be downloaded without an invite reports Kevin Tofel for ZDNet.

Once the app launcher is installed, Arrow divides the homescreen into three different parts and categorizes the apps in the smart device accordingly. The main screen displays top four recently used apps and downloaded apps. The second is the people page, showing icons of frequently dialed contacts and the third is the note and reminder pane, which provides options to add reminders. The most unique feature of the app launcher is the inclusion of note reminder page, which most of the Android custom apps do not include.

The app includes dock for easy access of recent used apps, it comes with an arrow and swiping up reveals another set of quickly accessible apps and options to select launcher’s settings, feedback and wallpaper pages. The one main lacking feature in Arrow app launcher is lack of customization options. The app does not let you add and delete pages or add apps on the homescreen pane. Since the app is still under trail period it is available for download only through an invite system on Google+ community.