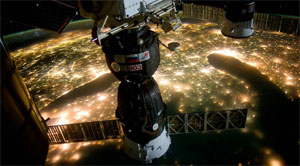 The partnership is the result of a Space Act Agreement between Harmonic and the agency's Marshall Space Flight Center in Huntsville, Alabama. The video contents can also be streamed on the internet, which may require 13mbps access connectivity to receive signals and achieve the UHD experience.

“Partnering with Harmonic gives NASA an outlet for its UHD content, which has four times the resolution of HD and is the next iteration of digital television,” says Robert Jacobs, Deputy Associate Administrator, NASA’s Office of Communications.

The 8 megapixel resolution of UHD camera can showcase high-resolution video ranging upto 6k and images generated from the International Space Station and other current NASA missions. Leveraging camera’s ability to record in high resolution at up to 300 frames per second makes it ideal for capturing dynamic events like spacecraft operations near the space station, such as docking and undocking.

The TV UHD video will be sourced from high-resolution images and video generated on the international Space Station (ISS), Hubble Space Telescope, and other current NASA missions. The Program will also include advanced footage from historical missions, shots from NASA's development and training processes, and ultimately live launches The product will create the closest possible experience of viewing the Cupola of the ISS, for instance.

NASA TV UHD will be broadcasted via the AMC-18C satellite, in the clear, with a North American footprint, like the current NASA TV channels and on the same transponder. Harmonic is currently in negotiations with pay-tv operators to carry the channel on satellite, cable, and optical networks.

Some of the pivotal development in the UHD workflow is Harmonic’s Electra X3 advanced media processor, the industry's first converged media processor for UHD content with live, full-frame, full-GOP UHD encoding. The solution will be powered by Harmonic PURE Compression Engine,  an advanced encoding technology that supports resolutions up to 2160p60 (HEVC Main 10) for broadcast and OTT multiscreen delivery, the Electra X3 enables NASA to deliver superior video quality at minimum bandwidth.