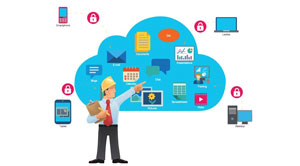 In this unimaginable impatient era of technology, only the best-of-breed applications and services are being leveraged to run business processes in an enterprise. The goal is to provide an impeccable service to clients and customers to boost the overall growth of the organizational infrastructure. The only way to achieve this—as experts suggest—is by seamlessly utilizing the power of the modern APIs using reliable, cost-effective, and secure cloud-based services. Eventually, the management is faced with a challenge of integration of the numerous cloud computing applications across the enterprise.

However, in a highly fragmented environment, the explosion in Cloud, SaaS, mobile applications, and the APIs has led to complicate the task of building connectivity across organizations. The APIs, most importantly, govern how one application can talk to another.

Get it together: OS & Middleware

Middleware has as many definitions as there are several cloud computing middleware solutions in the market today; the variation is based on functionality. If put in simple words, middleware can be defined as the technology employed to rule out infliction of integration by gluing two applications to communicate directly. And, this software layer situated between operating systems and cloud applications gives a 3D approach for platform management to carefully align cloud integration goals with management practices.

The Challenge: There are several attributes that ramify the OS and middleware tools management in the cloud. First, comes the tuning up of “normal” management practices, i.e. interoperability of current tools on cloud resident platform components. Next is the requirement of centralized version control for vertical architecture and its supportive components that assist in cloud connectivity. And lastly, the horizontal workflow integration between interfacing tools and platforms gives space to the right scope of operations.

The approach to the solution: The overture to management challenges can be tackled by a) remodeling and implementing state-of-the-art cloud management techniques to build applications and selecting most suitable OS and middleware components, b) exercising management when machine images are ready to be positioned and software packages (includes applications, OS, and middleware) are being created, and c) enforcing real-time management on the deployed systems of components, with respective OS-middleware sets.

The approach brings significant change in management interface as operations personnel can use the same tools in most of the cloud deployments. The only hassle would be its functioning across limitless systems and platforms, which are different in nature too. Many organizations today are however trying to support middleware management aggregation tools to address this. This will essentially strengthen the “horizontal-integration” approach promoting a centralized view of middleware and OS status and performance. Though sometimes, one need to be quite heedful about how cloud-friendly the middleware tools are; performance issues across application components and OS tool verticals may vary.

In the case of VM-based clouds, each machine image totes its own OS and middleware. Therefore, it’s easy to evade from sync across machine images, by chance, especially at the period of application change. So, vertical integration becomes a bit of a challenge here and to overcome this, distributed version control is a necessity as every machine image shall contribute to the characteristic of its platform-application elements.

Generally, one cannot deal with point-to-point complexities of middleware dependencies. A standard solution for vertical integration is achievable by setting platform elements across all components and selecting the middleware and OS version from a common library for integration. Until machine images are rebuilt after altering a platform, components will run the same version of the platform.

Horizontal integration, on the other hand, requires a multi-dimensional approach to face the multiple challenges in integration. OS and middleware platforms, together, can perform several component communications and encourage workflow interfaces for industries by taking up centralized cloud platform management approach. It helps multiple companies or independent development groups to connect components deployed by them in respective clouds. However, the version-control technique is anyway associated and required to square off glitches with vertical integration.

Another factor affecting the workflow systems and management at all levels is how components are being addressed. Many times, tightly coupled workflow systems create massive dependencies as they use service/message busses and SOA interfaces. Giant players and conglomerates, whose businesses are in succession due to the uninterrupted cloud services, look for suites of management tools from a single vendor—namely from Microsoft, BMC, IBM, Oracle, and others. It is easier to foster business with single vendors, comparatively, as these suites has built-in platform management strategy to unify user's own practices.

Conversely, besides losing "best-of-breed" capabilities for platform management, there is another bigger risk involved in a suite-based approach and that is the platform-based selection of suites. For example, dependencies on Java for cloud usage are more today, but, will it be justifiable to rely on it for your next 5-year plan? If that changes, you might consider modifying and adapting your tools in accordance with the changed middleware and OS platform.

What we have understood so far is, in a highly distributed environment, any change in technology gives businesses yet another challenge to overcome and indirectly urges to revolutionize middleware and the role of integration.