Preliminary Step towards Backing up your WAN 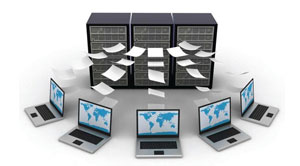 The United Nations Office for Disaster Risk Reduction (UNISDR) stated in its news release that the USA suffered a corporate loss of 44 million USD in the past decade due to natural calamities. This included data that was worth millions of dollars. Not only natural calamities, even an industrial accident can consume an organization’s resources. A stakeholder of an organization has many fixations to think about, when the thought of losing a facility to a disaster or accident comes up. “What if with a network containing dozens of sites, each thousands of miles from the next, and sharing hundreds of gigabytes of project data, someone has missed the delineated deadline?”, “What if the data lost is not recoverable at all?”, “How to ensure that everyone was able to collaborate on projects in real time just as they had before the disaster/accident?”

Increasing global economy, remote and multi-site project collaboration, and workforce globalization has opened the windows of opportunities for conglomerates worldwide. However, this has also caused the reality of dealing with data that sprawls across the organization to slither in. Whether data resides at an office in Amsterdam or at the HQ in Fremont, it is equally susceptible to loss, requiring that data recovery and security plans apply to all parts of the organization, regardless of location.

As the days of a closed enterprise Wide Area Network (WAN) come to an end (thanks to cloud), the significance of IT processes, such as data access and data back-up has grown for purposes of business continuity. Nevertheless, there are considerations that an organization needs to make before initiating the complex process of backing up their WAN remotely as project collaboration like these often includes multiple sites separated by oceans and thousands of miles. So, what are these points and their significance? Let’s discuss!

Preparing the WAN for remote backups

Backing up WAN does not only secure your data, it also simplifies a distributed backup infrastructure and reduces the associated operating and capital costs. Once you have settled on the idea of backing systems remotely, you must take some preliminary steps.

WAN bandwidth limitations and network latency dramatically influence approaches based on WAN. Limited bandwidth can cause the performance of the remote backups across the WAN to go down, and as a result, Remote backup projects may fail. This can make WAN-based backup impossible for organizations with large remote offices with significant data stores without significant costly WAN bandwidth upgrades. So, the initial stair that you need to climb is testing remote backups across real WAN connections. You have to choose the lowest-possible traffic conditions, to carry out these testing initially, and then test during typical traffic periods. Also, run your backups during peak evening traffic periods to test its interoperability in different conditions. If the backups are not completing on their allotted windows then there must be some quandary in the network latency or bandwidth. Even asynchronous replication and network backup can suffer from high latency because transfers can time-out across the WAN, leading to file transfer failures and subsequent synchronization problems.

There can be many elements affecting these quandaries to take place such as packet-drops and retransmissions, but the problem is mainly of limited bandwidth and network latency. Let’s discuss the solutions to this predicament.

Organizations approach this problem in several ways. Adding bandwidth, reducing demand, and application re-architecture are the most common advances that an organization takes to mitigate the limited bandwidth and network latency problem. Another method can be IT in the backup infrastructure might look at client-side data deduplication technology for remote sites with high backup traffic volume. Bandwidth issues can be also solved by IT via compression. Many organizations such as Blue Coat Systems, Cisco, Riverbed, and others, offer WAN optimization appliance, which reduces traffic volume by more than 60 percent for some backup streams.

In case of remote backup problems, deriving from network performance issues such as excessive packet drops and retransmits, or effects from network latency, the priority, and behavior of the network traffic must be looked at. WAN routers from MPLS providers can be tried in order to make accord with the higher priority of network traffic. Class of Service (CoS) is another process that can be used for resolving the same issue. CoS offers a very coarse granularity which makes it easy to determine the low and high priority service.

WAN Optimization is another option if CoS is unable to unravel the predicament. Not only compression, accelerations in the appliances can also be carried out by WAN optimization, which increases the throughput and mitigates network latency. Optimization also does mitigate packet loss and minimize retransmits by layering on some error-correction logic. Bulk transfers are speeded up by WAN optimization, which improves the capability of data back up. What it also does is it improves the response times for interactive applications such as databases, reduces bandwidth costs, and presents the opportunity to centralize file storage and consolidate servers. Some analyst firms even indicate that WAN optimization can decrease link utilization from 80 to 40 percent through caching and compression.

Enterprise Back-up technology has evolved significantly from the days of tape cartridges, robotic loaders, storage racks, and offsite vaulting services. With data deduplication, low-cost high capacity disk arrays, and server virtualization, backup technology has advanced significantly. There are numerous backup solutions in the marketplace and innovation is making them more cost effective while increasing performance. Adopting the latest in enterprise backup technology is absolutely the right thing to do. But before that you as an organization must build a strong foundation that considers the integration of job scheduling with backup scheduling. After consolidating on this foundation, think through all of the backup scenarios in terms of common use cases and design backup patterns to support them. Leveraging a short list of standard design patterns will increase quality and performance, which are key