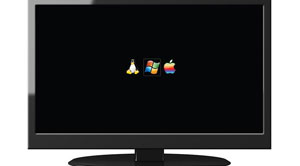 The latest reports and statistics on OS usage reveal that Windows occupies almost 90 percent of the operating system market shares. Since its introduction, Windows has been serving millions of industries as well as consumers, catering business and personal needs.

Windows OS is a complete and mature piece of software package that is compatible with almost all applications, drivers, and games. In terms of technical support, there are many online or offline users who can help resolve and troubleshoot issues. Despite of the exclusive packages Windows offers to fulfill most of the enterprise and personal needs; it has few flaws, such as investment on an antivirus program to safeguard the system, deceleration of computer resources like memory, disk space, and processor, and high licensing cost.

Though Windows is the widely-used OS, CIOs are looking for alternatives. Macintosh and Linux are the next most used operating system in the list. Mac systems are highly preferred by digital artists and graphic designers, and ‘C’ level executives concerning better security and seamless integration with Apple’s iOS devices. Mac OS gets almost no viruses when compared to the attacks on Windows OS. A reason for Mac OS's reliability may be that it is compatible only to Apple Computers and has minimal software and hardware crash logs.

Linux is globally supported and its features being remarkably utilized by developers, researchers, and academicians. Even, many technology enterprises such as Google and Amazon use Linux to support several business processes. The U.S. Department of Defense employees also use a Linux-based OS on a CD or USB stick, while they are away from the office, to log into secure networks from untrusted PCs.

At some point in time, Windows 10 is likely to become the most used desktop operating system. However, Linux and Apple's Mac OS X have their roles and position in the IT enterprise.

Integrating Mac and Linux Clients on a Windows Enterprise Network

Sharing of simple files across the network in Mac and Windows is carried out through the in-built features of the operating systems. For Linux and Windows, Samba—software application can be leveraged to share printers and files. The Samba functions well on smaller networks, but it becomes little impractical on large networks that run Active Directory.

To overcome this hindrance, the recent update of Linux and Mac OS X works with Microsoft System Center Configuration Manager (SCCM) that allows Mac and Linux PCs join Active Directory similar to a Windows client. IT administrators and managers can leverage SCCM to enforce settings, and discover, audit and push patches to Linux and Mac systems with the clients for Additional Operating Systems module. Similarly, Casper Suite, management software from JAMF Software, can be used for Mac integration.

Software for Active Directory bridging is also available from companies such as BeyondTrust and Centrify to manage Mac and Linux systems in a Windows environment. Another option to back up Mac is to run OS X server on the network. The Mac clients assisted by OS X Server can communicate with Windows clients— share printers, files, and more.

In a case of Microsoft Exchange and email support, Mac OS X's calendar and mail can connect with the clients, but with fewer hiccups, if POP3 and IMAP are enabled in Exchange.

It is possible to run Windows applications on Mac and Linux systems with the aid of software such as ‘Wine’, a compatibility layer that can run Windows applications on other OS. CodeWeaver CrossOver Linux is a similar option for Linux distributions. Also, virtual machines such as Oracle VirtualBox and Parallels Desktop for Mac also serve the purpose with full network connectivity.

Perhaps, the most flexible way to provide the same applications to users regardless of OS is to use Software as a Service (SaaS) option, offered in the form of Google Apps, Microsoft Office 365 or Zoho Office. Everything is more generic when running out of a Web browser, and SaaS requires little time and effort from IT.

Third-party tools take away a lot of the sting associated with running Macs and Linux systems on a Microsoft-based enterprise network. Be sure to test-drive several tools in your own environment before deciding on the best approach.