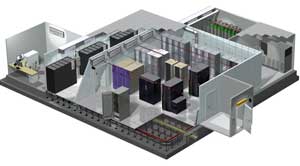 Modern day data centers are turning out to be a complex mace of systems—both physical and virtual. The rising complexities within the data centers and the constant need for personnel managing them to optimize the operating costs, has prompted organizations to exercise better control over the expenses governing their data infrastructure. While the stalwarts of technology identify numerous parameters to optimize the operating expenses of data centers, reducing the energy consumption features is prominently on the list. Controlling the HVAC infrastructure, which powers and cools the data centers (as also other areas of enterprises), plays a crucial role in the process. This has driven a complete shape-shift in the data center market with several tools equipped with features to streamline power consumption, heating and cooling of systems.

Although different DCIM tools tend to have different features, some of the traits can be commonly seen in all of them. Typically, DCIM tools blend the activities of traditional data center management with modern day features such as analytics, to provide better insights into the overall functioning. User-friendly graphical dashboards offering real-time visibility into various parameters such as power consumption or network bandwidth usage are an integral part of DCIM tools. By aligning the IT infrastructure with the business needs, these tools tend to simplify change management manifold.

The insights provided on a “single pane,” allow IT administrators to respond to the issues detected immediately, thereby curbing a majority of the imminent problems. The visibility provided by the DCIM tools, allows organizations to place their staff more efficiently within a data center avoiding any possible duplication of tasks.

When implemented well, a DCIM strategy tends to increase the operational efficiency by optimizing the overall performance. However, there are certain myths associated with the role played by DCIM. Three among the most common myths are:

• DCIM’s role is restricted to the data center

While DCIM certainly has a role to play in optimizing data center management, its influence can be extrapolated to include various operations of an organization. For example, HVAC infrastructure is not restricted to the data centers, but a basic requirement for all workstations and cabins within the premises. In such a situation, integrating the infrastructure at workstations with a DCIM tool provides visibility into the consumption of power or bandwidth and eventually helps organizations in optimizing them. Therefore, it is a myth that the role of DCIM is restricted to a data center; it is relevant across the entire organization.

• DCIM is merely about monitoring

DCIM is not just about monitoring the various parameters; it is about managing the entire gamut of enterprise operations. Apart from providing visibility into the performance metrics and the myriad of ways in which each metric could be interrelated; DCIM provides actionable insights, which help managers in making the right decisions to streamline all processes to the maximum.

• DCIM is about Power

While the number one priority of DCIM is to reduce the costs incurred on energy consumption, it is equally vital to monitor and manage the various assets to detect discrepancies in them with regard to power or bandwidth consumption. Therefore, this requires a DCIM tool to control the operation and utilization of assets all through their lifecycles, within an organization. Equally well, proactive responses during failure of one device to ensure that the operations do not get crippled, is also a common functionality of most DCIM tools today. Although the concept of DCIM was predominantly founded on the need to find ways for reducing energy consumption, it has subsequently expanded to include a variety of areas such as asset management and risk management, under its fold.

Managing the complexity of today’s data centers requires a sophisticated approach that guarantees optimized consumption of resources without any compromise in performance. DCIM tools have bridged the gap by the consolidated view of enterprise assets and their performance, to improve the decision-making process. While DCIMs initially were targeted at reducing only the power consumption levels, over a period, today they have progressed to offer an integrated functionality, encompassing asset management, energy management and risk management among others.