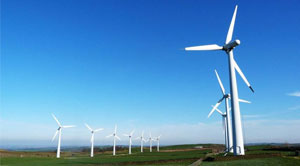 Wind is a clean origin of renewable energy that creates no air and water pollution. Considering wind is free, operational costs are nearly zero once a turbine is built. Industry specialists predict that if the pace of the growth continues until 2050, one-third of the world's electricity needs will be fulfilled by wind power. However, the disadvantages include complaints from locals that wind turbines are ugly and noisy.

From an ecological point of view, the slowly rotating blades can also kill birds and bats. Moreover, the wind is variable, and if it’s not blowing, turbines don’t generate electricity. Mass production and technological advancements are making turbines cheaper.

Aalborg University (AAU) researches in Denmark are developing a wind turbine power converter with a built-in battery system capable of absorbing and emitting energy as needed, thus eliminating production. The project is a partnership between the AAU, Ørsted and the Swedish Corporate Research Center of ABB, funded by the Innovation Fund Denmark with DKK 6 million. The purpose of this funding is to close the disruption caused by winds. The problem with wind turbines is that they produce electricity "as the wind blows." When high winds are present, production increases and electricity prices fall; when the wind decreases, production decreases and electricity prices rise. Is a problem for the grid and a lousy deal for the owners of the wind turbines?

The project aims to answer the problem faced by offshore and onshore wind turbine operator. Currently, equipment has to be acquired by many suppliers, which creates mismanagement in the supply chain for the operator, which means challenges in coordinating and optimizing the system. The funded project has the predetermined potential to significantly reduce costs and increase thy profitability of the wind turbines be combining several functions in on the product. This project will make the wind turbines the iPhone of the industry. This project has the potential to disrupt the energy business.

The goal of the project is to develop a full proof solution that integrates battery storage with wind turbine operation, which has the potential to lower the cost of the electricity production, and it has higher chances to deliver renewable energy with the same or higher levels of security and resilience as fossil fuels. The advantage of this research, in optimizing turbine operation, and potentially lowering the cost of electricity production; both of these are necessary if the renewable energy companies want to dominate the market.