Robotics will Revolutionize the Food Industry in Coming Years 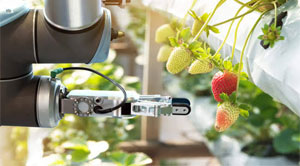 Food industry robots can boost productivity, enhance product quality and stability, and reduce the cost of production. It also serves as a forum in foreign countries to support and encourage traditional cuisine.

FREMONT, CA: It is predicted that food robotics will grow into more than a $3 billion industry, according to multiple surveys on the marketplace. The lack of workers, automation, and technological technologies expands the concept of the job a robot can do. Scientists and other creative firms worked hard to develop advanced sensory system robots.

Here are a few innovative features of the sensory robots now being introduced that will soon conquer the food industry.

• It is a dream that has been built with the most advanced and useful benefits as the first sensory system for robots. Visions of robots are used to inspect the grading of food quality and other evaluations of ingredients. Meanwhile, robotics technology can differentiate between the food's quality attributes, such as product staining to determine the satisfaction of the quality threshold. The foreign material contaminants, such as plastic and metal, can also be identified by robots in the final food products. They can build meat carcasses ' 3D models and cut them efficiently without the edibles being wasted. Finally, robots can read bar codes, identify goods that are mislabeled, and organize packaged products.

• Coming to the next feature, odor, which has specific patterns, is being identified by the robot noses, surpassing the human ability to differentiate them. Several bio-nano engineering companies are creating an e-nose that can sniff out the pathogens, detect contamination quickly, and put off food poisoning.

• New-age robots are getting into the act of sampling a portion of food. Various companies and their teams are working on an AI language that draws inspiration from the taste buds of humans and can identify complicated liquids. To determine the chemical composition of the substance and identify it by cross-reference, it took less time, sensors, and an app.

Additionally, they can be used to check the origin of the raw materials and to identify the forged products. It is possible to use AI-powered taste-testing robots to determine at once the quality and authenticity of the mass-produced food.

• Robots have long been able to hear and process voices. Therefore, it is predicted that future designs will have features that can detect sounds other than the human voice. These systems can be used to carry out rescue activities and other voices that may need attention.

Check This Out: Food and Beverage Technology Review