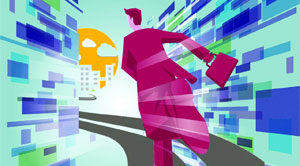 During the mid-nineties, after the emergence of ‘The Digital Age’, the IT realm, especially the enterprise sphere was in a state of panic owing to the supposed ‘21st Century problem’ that could plunge computing ecosystems into confusion. The Y2K bug or the millennium bug as it is now known was apparently the result of programmers resorting to representing years with two digits neglecting the ‘19’. For computers, the year 2000 would mean ’00 (1900) which would affect all concerned sectors especially banking, core technology and aviation. Entities including the U.S. and U.K. government played active roles in instilling the patches on to the existing IT infrastructure. The task of rewriting software that was ‘Y2K compliant’ was majorly outsourced to offshore firms in Asia especially today’s big firms of India such as Infosys and TCS, who minted huge revenues. As CNN Money reported in 1999, “Cheap labor is leading many corporations to this hotbed of programming activity.”

In the end, as the new century began to dawn, neither did systems slip into chaos nor those countries who had done little to prepare for Y2K face significant technology glitches. Many skeptics even dismissed the Y2K bug as a hoax as though averting a potential threat (with bone crunching hard work) contradicted them of the expectation. They had built up in response to the speculations, warnings, and predictions of IT experts. However, the situation of red alert led to rise of a resource saving approach, wherein in the wake of the potential threat companies began to measure the financial benefits of every application in comparison to the costs of its maintenance and operations. The approach is known today as Application Portfolio Management (APM) which can be considered as an intersection of the enterprise wide portfolio management and IT oriented Project Portfolio Management (PPM).

While PPM is mainly project driven, APM brings into consideration various aspects such as dependencies, compatibility, and cost. This is more valued in today’s enterprise landscape where losing out in the ‘corporate race’ due to lack of a technical edge is every CIO’s concern. Yet, not all supposedly new offerings need necessarily be adopted nor should existing tools be replaced merely on grounds of market trends or in some instances, ‘marketed’ trends. Intense market competition on the other hands, fuels an unprecedented rate of mergers, acquisition and migrations placing all the more burden on enterprise architects whose job is to orchestrate a flexible, accommodating, workflow least affected by disruption such that they don’t claim chunks off the balance sheets. APM thus bridges organizational policy and IT strategies thereby increasing the CIO’s perspective visibility in the enterprise.

What to expect from an APM solution.

Early offerings of APM solutions were built for developers with little options for production monitoring. Higher cost of ownership and low scalability rendered them little suitable for modern applications. However, modern APM solutions have come a long way from their humble beginnings.  They now provide deep insights through end-user driven analytics. Simplified interface for users other than developers, improved time-to-value proportion, installation process with minimal manual definitions are added mutation of modern APM offerings. Support for DevOps, compatibility with cloud and virtualized environments are also among what enterprise can expect from modern APM vendors.

Strategizing is where all APM initiatives begin with, upon receiving the information related to productivity and utilization factor of existing applications, CIOs may then explore possibilities for inducting newer offerings/areas that could sustain or accelerate the organization’s growth. For a CIO to make thorough enquiry toward newer offerings, an APM tool should first answers similar enquiries in regards with the existing applications in place; such as: Does the system align to the business objectives? Would it reduce the TCO? What would be the cost of maintaining newer systems? Are they compatible with the existing workflow? How much of the functions in the newer system overlap with existing one and are there any distinctive innovations? Once a prospective route is identified, ways to optimally divert spending on existing project to the new approach can be formulated.

MEGAstream: Going Above and Beyond Custom Web Development

Bayshore Solutions: Bridging the IT and Marketing Divide