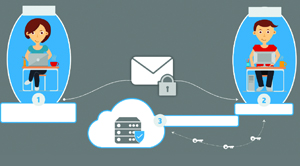 Long gone are the days when, in terms of complexity, handling data seemed to be a piece of cake. The current technological scenario portrays a situation where enterprises are constantly trying to tackle numerous vulnerabilities by leveraging the most innovative, latest, streamlined and highly productive techniques available in the data security space. ‘Encryption key’ is a feature which is quite familiar to enterprises dealing with colossal amount of data. But, serving as an effective gateway, even a minor loophole in the encryption key may expose a company’s business critical data to potential hackers. Although frequently updated and new forms of encryption methodologies are emerging on a large scale, assigning user specific access to the enterprise data always turns out to be strenuous process.

The following incident may help you understand the significance of encryption in data security:

Last year, MNH Platinum, a vehicle leasing company based in the UK was victim to a traumatizing event. It was a breach; effectively targeting the organization and making them victim of a virus which broke into their secured data and seemed unstoppable. The virus decrypted around 12,000 files in the enterprise network. Later, the criminals demanded a ransom of more than £3,000 for the company’s files, failing which; they threatened to decrypt the files. Confused and unprepared at the peak of chaos, the company agreed to pay.

With an aim to avoid the aforementioned situation and to build a robust encryption management strategy, enterprises should consider a wide array of security protocols.

Depending on the number of users accessing the confidential enterprise data, a company’s team of experts should deploy an appropriate key algorithm. The two key algorithms include:

In cryptographic terms, symmetric key algorithms deal with the aspect of using the same keys for encrypting plaintext and decrypting the ciphertext. It offers optimum integrity and authentication services featuring the unique Message Authentication Codes (MACs). As a part of their standard strategy, MACs generally utilizes a cryptographic hash function or a symmetric key-encryption algorithm.

Asymmetric algorithm includes public as well as private encryption keys. Organizations should make sure that the private key is assigned to a trustworthy person who can control and manage the entire encryption scenario. Acting as the supporting pillar of an encryption protocol, the algorithm effectively generates random numbers and manages digital signatures to achieve superior levels of encryption standards.

To establish rigidity in an encryption strategy, enterprises should deploy strong passwords to safeguard their confidential data. A 256-bit encryption technique is ideal for most enterprises as a potential hacker will need 2256 different combinations to access the data.

All encryption efforts made by the enterprises might fall apart in the absence of a well structured authentication protocol. A well defined key manager should be incorporated; which includes a complete list of the user profiles that are allowed to access and view the encrypted data. Administrative rights to manage these processes should always be granted to a person with superior authority.

Sensitive business information is always vulnerable to external breaches. By maintaining logs, it should be monitored and tracked on a regular basis to stage an extra level of protection. The logs should display vital information such as the specific data accessed by the users, their identity and the time of access.

Most organizations consider security breaches as inevitable. But, by implementing the right course of action at the right time, they can tackle breaches in an innovative as well as highly responsive manner. In case the IT administrators feel like the existing encryption keys have been compromised, deleting them and re-generating new keys immediately is always a wise decision.

To stay on the safer side no matter what happens in an enterprise environment involving secured data, the task of maintaining backups on a daily basis should be on the top priority list.

In a constant quest to achieve optimum levels of security for their valuable data, enterprises are either updating their existing encryption technologies or adopting new ones. Considering the aforementioned features and putting them into force can help the organizations achieve success in the data security arena.