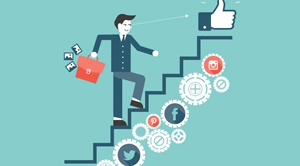 The smorgasbord of social media platforms is increasing day-by-day and it helps in making anything viral in couple of hours. A Recent example of the impact of social media is the virtual reality-driven Pokémon Go game. It took the gaming industry by storm and became a sensation all over the world in just 48 hours or less. Social media works as a channel where businesses can directly connect with the consumers, but this practice is not a traditional way of marketing. It totally works on the course of algorithms, so nothing is certain about it. The rate at which social media platforms are increasing also makes it difficult to hone in most effective one out of the long list. A survey conducted by Clutch reported that till 2016, about 57 percent of small companies have presence on social media and predicts that by 2017, about 75 percent companies are planning to engage with it.

A well-built social media branding strategy can increase the reputation of the company; empowers them to understand the customer experiences for their products and services. On the other hand, failing to include social media in marketing tactics has risk of losing market to counterparts. Building a social media strategy is not an easy task when there are dozens upon dozens of social networks and works for different purposes with individual strengths and weaknesses. If strategy went awry than companies will have to suffer from the slings and arrows of social media.

Every company starts social media branding to attract more followers and then convert them into potential customers. For instance, PwC is a B2B marketing firm and recently won the Shorty Award for running a #BallotBriefcase campaign on Snapchat. This is an interesting campaign started by the firm to show its 82-years involvement with the Academy Awards. This campaign includes ballot briefcase containing Oscar winner’s names and its journey throughout the country till arriving at live ceremony awards and generated a lot of buzz and interest between audiences. The Ballot Briefcase campaign increased the Twitter audience of PwC by 136 times winning them more followers on Snapchat, Instagram, and Facebook.

Being Consistent in Audience Interaction

Irregular posting of content can kill efforts of social media branding. Thus, it is necessary to post new content on social networks consistently to keep the brand alive in the minds of audiences. Companies need to create meaningful and relevant content that drives the viewership. Every single piece of data that company is sharing on its page should represent company brand image. A picture resonates better with audiences in comparison to blog posts but data also need to be shared. Visual content is one of the best ways of interaction with the audiences. A survey by Socialbakers website, reported that the posts with images on twitter receives nearly two times more views comparing to text posts. Even ratio of text posts to content with images on Twitter is 1:7. This survey shows the relevance of authentic and valuable content with company brand image.

Bad thoughts spread faster than good beliefs. Same goes for brand marketing as one bad publicity can dilute all good public attention earned before. After making a blunder, it’s hard to fulfill the damage created by the ill-advised social media activity. One online oops moment can put company image on the stake.

On the eve of New Year 2016, coca cola was under rough weather when a tweet went wrong causing uproar in the Russia-Ukraine region. This incident is a testimony of the power of social media in the present world. One wrong post on the social media can destroy brand image. So, company need to be fully sure about the content they are about to post because once it is live, businesses may end counting the cost.

Social media platforms are today’s among the most powerful communication platforms and as such businesses need to make sure they got the right content at the right time.

ANRO: Digital Marketing in your Mailbox