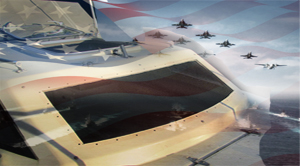 CHARLOTTE, NC: UTC Aerospace Systems enters into a new contract with U.S. Navy. It executed its first sonar dome rubber window contract, which is delivered to the U.S. Navy on-schedule and on-budget. This is a part of their five-year indefinite delivery and indefinite quantity contract with UTC Aerospace Systems. It is further marked as the 345th delivery of surface ship sonar dome rubber window in support of Navy Fleet.

Sonar domes are supplied by UTC Aerospace Systems' Engineered Polymer Products (EPP) team in Jacksonville, Florida, for U.S. Navy’s FFG-7, DDG-51, and CG-47 class ships and partnered with multiple Navy forces for more than 50 years. EPP, a United Technologies unit is a division of Aerostructures business which is situated on Blount Island for shipping and distributing the sonar domes to shipyards from the dock at reduced shipping costs.

Sonar dome rubber window is a transparent housing that circumambience the sonar transducer array on the bow of destroyers and cruisers, forging the sonar’s sensor system. The ship’s sonar array is guarded by the dome and minimizes the interference in sound transmission and reception which empowers the diagnosis and classification capabilities of finding underwater targets. Evolution of rubber wire-reinforced surface ship sonar domes was initiated by EPP to handle anti-submarine surface combatants. It increases the ship’s detection power by using rubber’s eccentric energy, which has absorbing and reflecting properties.

EPP team aims to remain as the chief provider of sonar dome rubber window to U.S. Navy, as they have come up with extremely durable sonar domes with proven capabilities and quality. "The drive for continuous improvement by our team at EPP and endless focus on improving our sonar systems technology, combined with the development of innovative processing techniques, uniquely positions us to offer superior acoustic technologies," said Marc Duvall, President, Aerostructures.

EPP also provides field operation facilities like installation, inspection and repair of its sonar domes through their highly experienced engineers and technicians. The EPP services are available throughout the year, worldwide.