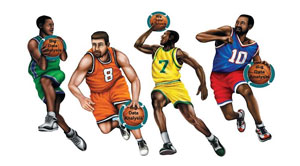 Being a statistical affair, sports industry reside a huge space for getting information about players, fans and the game itself. It’s quite enchanting to know the little bits and slices of the game which have a huge impact in understanding the nomenclature of the game and players. This lucrative information is quite fascinating to know and is mainly credited to the technological intrusion in the world of sports. Moneyball, the 2003 book by Michael Lewis gave an idea about a term “on-base percentage” (OBP) which helps managers to select their starting team. This can be further explained as a measure of how often a batter reaches base for any reason other than a fielding error, fielder’s choice, dropped/uncaught third strike, fielder’s obstruction, or catcher’s interference. As the statistical analytics in sports is gradually changing the quality of every sport, the team managements are utilizing these numbers to get the best results. "Advanced analytics has already been changing entire industries for over a decade and is a key factor for how most new entrants disrupt established markets and beat their incumbents — whether selling books, renting movies, borrowing money or even building a professional sports team," says Jim Hare, research director at Gartner.

However, every game is getting faster with each passing day; fitness levels are increasing, and viewership is expanding across the globe. There are multiple analytical domains to address, including game and player performance, player selection, customer relationships, business management, and injury prevention. Keeping this in mind, a research conducted by ESPN revealed that the NBA team Philadelphia Sixers has led the way in putting analytics to good use ahead of all professional sports teams.

Over the past few years, the world of sports has experienced an explosion in the use of analytics, the major conference for sports analytics, sponsored by MIT, has grown from 175 attendees at the inaugural event in 2007 to over 2200 in 2013. Despite the evidence of remarkable bustle and growth, the use of analytics in sports is not without its challenges and has a plethora of advancements to offer.

The sport fanatics have that craziness about knowing the stats and figures of the game. Little tackle statistics to points fetched, runs scored to goals scored; every bit of stat has its meaning and defines a player performance. The information over the websites and TV channels is broken and simplified so that an average fan can understand the critical game’s statistics easily.

Everyone remembers Frank Lampard’s goal against Germany in 2010 FIFA World Cup that was disallowed due to the lack of goal line technology in such a reputed event. Many sport pundits discussed that the technology to help the referee should be embraced to produce accurate decisions rather than heartbreaks. So, with the advent of new sports analytics and technology, decisions can be reviewed and overturned with the call of referee.

Tagged along the Jerseys and Shoes, wearable articles help in deriving the information about a particular player, his fitness level and heart rate. That kind of real-time data could help trainers and physicians plan for better training and conditioning. Matt Hasselbeck, quarterback, Indianapolis Colts, says he's in favor of technology that helps with player safety. "By checking hydration levels or tracking hits to the head, we could start collecting that data now to make sports safer." It can influence the decision of the coaches to include the top performing players and the ones who need more training.

In real time analytics, RFID tags are attached to the players, balls, goal posts, bats and many more to achieve a real time data from the field. The technology is used to track movement, distance and speed of balls and players. The tags blink 25 times per second and deliver data in 120 milliseconds.

"It's about knowing when a fan is interested in an opposing team coming to town or whether a 4 p.m. game is not too late for them. It's about hitting them with that communication when they are in the decision mindset and giving season ticket holders more incentive to keep coming and retain their tickets," says John Forese, Senior Vice President and General Manager of LiveAnalytics. Now professional teams create a team specific mobile application to let the fans know the statistics prior to the buildup of the game. So it is always said that ‘the better they know their fans, the better they can cater to them’.

Years Down The Line.

Despite the noteworthy expansion in the quantity and variety of data accessible of examination and analysis, sports analytics still faces the same ubiquitous challenge of getting meaningful information into the grasp and minds of the people who are in a situation to make valuable use of it. According to Clifford Stoll, “Data is not information, information is not knowledge, knowledge is not understanding, understanding is not wisdom.” As the spectrum of Data analytics is widening, the world of sports is also entwining to it. From fans to players, from management the staff, the flow of critical information is necessary for a seamless working within a professional team. As information in coming times would be overwhelming, the execution has to be spot on to get the best of the results. Sports analytics will persist to develop. They will undeniably turn into more heavily relied on, but there are still ways that they can be improved. Eventually everyone wants to win, and if we have a technology to back it up, why not inculcate it?