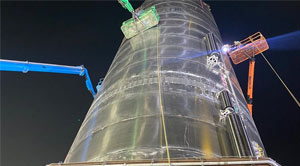 The Starship SN3 prototype vehicle was on the pad at SpaceX's test site at Boca Chica, Texas, undergoing a cryogenic tanking test, during which the vehicle’s propellant tanks are filled with liquid nitrogen

Fremont, CA: A prototype vehicle of SpaceX's Starship next-generation launch vehicle was destroyed during testing at the company's South Texas facility on April 3. This is the third time in five months that such an incident has taken place. However, experts believe the incident may have more to do with the test than the rocket itself.

The Starship SN3 prototype vehicle was on the pad at SpaceX's test site at Boca Chica, Texas, undergoing a cryogenic tanking test, during which the vehicle’s propellant tanks are filled with liquid nitrogen. Shortly after the testing began, the prototype vehicle appeared to crumple about halfway up, causing the top part of the vehicle to topple.

In November 2019, SpaceX's Starship Mark 1 vehicle suffered a bulkhead failure during a similar test, sending the debris flying all over the place. The company had stated at the time that the incident took place in a test intended to pressurize systems to the max, so the outcome was not wholly unexpected. A second Starship vehicle, SN1, was also destroyed in a cryogenic tanking test on February 28, this time with the vehicle bursting near its base.

"The failure in that test appeared to be with a thrust puck at the base of the tank that takes the load from the vehicle’s Raptor engines," said Elon Musk, Founder and Chief Executive of SpaceX. The company then decided to strip the next Starship vehicle, SN2, down to that tank to test the performance of the thrust puck weld. Those tests took place in early March without incident.

Shortly after the Starship SN3 incident, Musk suggested that the failure may have been caused by a problem with the test itself. “We will see what data review says in the morning, but this may have been a test configuration mistake,” he said. If the test had been successful, SpaceX was preparing to perform a static-fire test with Starship SN3.