Teqball: A Hybrid Baby of Soccer and Table Tennis 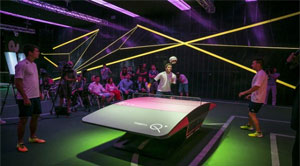 FREMONT, CA: Teqball, a hybrid table top game was recently developed by Hungarian natives, Gábor Borsányi and Viktor Huszár by combining Ping-Pong (Table Tennis) and Soccer along with technology. The game can be played by one, two or multiple players.

“The main idea was to develop a new way to play soccer with friends. Teqball can be played by people of all abilities and ages, although there is a short learning curve,” says Huszár, a computer scientist and president of the football club at Budapest University of Technology and Economics.

Teqball is part football training tool, part competitive table game and part hybrid sport. The game has a specialized table called the Teqboard; designed in way where the ball always bounces out toward the players due to its curved physique

“We initially launched on the Internet and then attended international festivals to showcase our product to test out the rules of the game and gain feedback. The United States is very accepting and open-minded to the new sports,” adds Huszár.

Teqball is not just confined to soccer players, due to Teqboards durable surface the developers has come up yet another new game, Teqtennis called ‘Qatch’ which is quite similar to dodge ball.

The Teqbox consists of four motion sensor cameras that surround the indoor Teqball table which record the score of the game, calculate the number of touches, and tells you which body parts a given player uses most and least frequently. This will help the player to identify his skill thereby improve on them.

The other advantage offered by Teqball is that; if a user is willing to learn playing techniques of a professional soccer player then one can enjoy the offer of downloading their favorite player’s personal training applications for a minimal price through the Teqball mobile app.

Within the coming months the entire Teqball system will be officially launched.  Teqball recently participated in the Elite Sports Performance Expo, which was held in London. The Expo showcases the newest sports equipment, technology, facilities and services from around the world.

Introduction of Teqball has extended different possibilities for the users to develop and strengthen their skills in order to bring out the best soccer player in them.