The Basics of API Economy 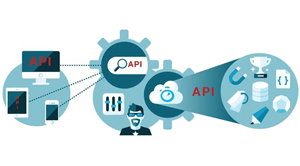 The word API is of great significance in the tech industry, as these are the components which determine how an application interacts with the rest of the software world. Modern applications come with an exploding number of System and Web APIs that makes it possible to move information between programs. APIs enable access to content, social networks, events and identification and they allow applications to share data on one another’s behalf without sharing all of the codes.

On the Web, APIs extend a broad range of services that let other apps augment their offerings. For example, Google provides APIs for searches and calendars and the APIs of social networking platforms like Facebook and Twitter allow other applications to post status updates. API makes it possible for information exchange among applications and allows them to take actions without sharing their software codes. However, they do unmask a portion of the program’s internal functions to the outer world, in a restricted way.

APIs can certainly create an impact on the organization’s profitability. Platforms such as Salesforce.com, eBay and Expedia.com generate more than 60 percent of their revenue through APIs. This trend is expected to become widespread in the days to come and as rule of thumb the early adopters will become the greatest benefiters. APIs will allow businesses to venture into market spaces they have never previously explored. Consider the case of IBM developed Watson platform, which the company opened up to be accessible through APIs. This well calculated move by the software giant IBM allowed ideas and inputs from various third-party firms to pour in, the result of which was incredible.

Web APIs play a wide variety of roles in today’s business environment. They engage mobile and social media platforms and are also used in ecommerce, where web services and contextual information are blended to provide better user experience. A web API bands together on premise assets to a web based application; for example, a product catalog to a social network or a marketplace. It also connects one on premise to another on premise infrastructure and similarly connects cloud to cloud.

Companies deploy a range of mixed technologies, applications and systems over years to deal with various organizational processes. But these traditional systems prove to be inefficient as newer methods and technologies emerge, which also creates interoperability issues. Businesses that depend on such legacy systems are prone to risks when attempting to add modern software such as SaaS applications or the latest API. More often these risks are dealt by point to point integrations among the existing systems. But with passage of time these methods tend to be ineffectual, complicated and costly to be retained. Interoperability challenges should therefore be addressed when a business is developing an API for greater adoption.

A Cloud-first plan in API

Of all the benefits of cloud technology, flexibility and cost effectiveness are the two widely accepted features. For enterprises, a cloud-first plan may prove to be useful in building API strategies, provided it serves as a way to spread out their assets to the larger audiences. If implemented in the right direction, a cloud-API strategy will bring fruitful results in terms of productivity and innovation, and will create new markets and channels.

Analytics is the driving force behind the growth of an API economy. Companies draw insights from the API data usage and analyze them for three main reasons: to drive more adoption, for new market opportunities, and to improve the development cycle of APIs. The ground level analytics involves data mining to identify the most frequently used APIs, its users and how they use those APIs for their advantage.  At an advanced level, the collected information is used to predict the potential changes to API ecosystem, measure the traffic and also to understand customer perspective of the service.

Analytics can also help identify the complementary APIs that can be brought together for performance escalation. API providers may capitalize on certain areas which deem to have deviations from the permitted limits. For example some consumers may be using APIs much differently from the ways the API provider had foreseen.

Expert views suggest that we should never assume the availability of an API forever, just because it is available now. For instance, LinkedIn had locked down the third party use of most of its APIs to shift focus on different types of integrations. According to the official sources, the move was to deliver a unified experience. There are many such examples from the enterprise world to quote, as a proof to the technical prediction stated above.

Companies shut their APIs anytime depending on their current business scenario. But it doesn’t seem to dampen the enthusiasm for APIs on the part of service recipients, owing to the remarkable variety of services they offer. One of the recent announcements of API shutdowns was by Google Earth, which has redesigned the online application due to security concerns and diminishing cross-platform support for NPAPI plugin frameworks.