The Future is Smart Robotics

The Future is Smart Robotics 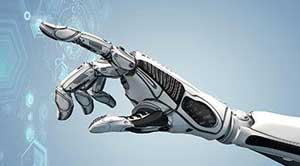 Use of smart robotics tech is no longer confined to traditional sectors like manufacturing and automation as it is becoming a part of every business growth story with a diverse range of applications across multiple industries such as logistics, banking, retail, agriculture, healthcare and so on.

The robotics industry is also giving impetus to the use of robots for activities such as robots that kill germs, robots as teaching assistants, and robots for crop harvesting. Other uses include robots that learn the concept of ownership, robots used by people remotely to earn income and robots that prevent seriously ill students from social isolation.

With such unconventional usage of robots, the robotics industry is revolutionizing future for smart robotics purposes.  Also the robotic manufacturing companies will be able to see how robots that have been experimented for the use of unconventional ways have value for the marketplace as commercial success.

The Andro-humanoid robot that expresses feelings and emotions like humans can perform household tasks and also helps older adults. The robot is smart, advanced and equipped with many sensors. The robot has motorized systems such as human joints, sensors such as human eyes and controls like the human brain. Also, another living example is Sophia, the world’s first humanoid built by Hanson Robotics, a Hong-Kong based company.

Such intelligent innovation with the help of machine learning, deep learning, and artificial intelligence is worth proving the future to be smart and fast-paced.