The Need for Data Encryption in Cloud 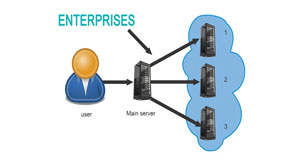 Cloud environments today face threats similar to traditional corporate networks, but the vast amount of data stored on cloud servers, further flaunts it as an attractive target. While various organizations are looking forward to reap the benefits of the cloud, data security concerns keep their actions in a tentative spell. Effective data protection and strong encryption techniques in the cloud has to be implemented and maintained to be safe in the world of internet.

Even though the computing technology and internet are in the extreme lines offering a mass amount of useful information, along the way exists several threats too. The online threats and hackers always try to peep into confidential information whenever possible.

Encryption does not itself prevent interception, but denies the message content to the interceptor. In an encryption scheme, the intended communication information, referred to as plaintext, is encrypted using an encryption algorithm, generating cipher text that can only be read if decrypted. Matt Nelson, President and CEO of AvaLAN Wireless, warns that the United States' next Pearl Harbor will be a cyber attack. Imagine, he says, if websites such as Google or Microsoft are brought down entirely due to an attack. Both of those companies hold massive amounts of consumer data on their cloud servers so encryption should be considered a standard business practice, he adds.

Online data security is a complex, rapidly evolving landscape, requiring robust and layered protections. Encryption in cloud is one tool in a comprehensive defense-in-depth strategy to mitigate the risk of accidental and intentional data breaches. The first option for data protection in the cloud is encryption. With data protection in cloud environments where data and systems are dynamically migrated across platforms a variety of new solutions and tools can help organizations adequately control encryption keys, policies, and authentication and authorization associated. Without strong encryption and unique credentials, files can be vulnerable in the cloud, but there are also risks during data transmission. Encrypted files do not need to be sent over a secure connection, but it is best to assume the worst and protect the information by sending and retrieving data over a secure connection.

Encryption in the cloud is important to protect outgoing data from unauthorized access, so that the data is not vulnerable even if it is outside the protected environment. Data encryption is commonly used to achieve compliance with industry regulations, including HIPAA and PCI DSS and is an essential cloud data security tool for organizations using popular SaaS applications. The data may exist as structured data in an app like Salesforce or ServiceNow, or as unstructured data in file sharing apps like Box or OneDrive. In either case, a cloud access security broker (CASB) provides a way to encrypt the data using keys that you control.

While focusing on the data and as a strong security strategy is a necessity, it should not also seriously impact the overall performance of the system. In addition, encryption should be automatic with no turn off option. This way, if there is no insecure mode, then there is no chance of someone accidentally sending unencrypted, vulnerable data to the cloud. Keys should also be securely escrowed, and difficult to retrieve, so that no third-party can obtain that key to access your data.

Cloud application users have choices when it comes to the strength of their encryption solutions, and standards have emerged across jurisdictions and industries to provide consistency and a level of assurance. For most organizations, the main drivers for cloud encryption are intellectual property and trade secrets, along with regulated data like personally identifiable information, protected health information, and credit card data. For others, data residency concerns or policies that require control of encryption keys lead them down the path of cloud encryption making the ciphering technique as an inevitable part of today’s digital security.  The cloud presents a tremendous opportunity for enterprise IT, but only if the system is embedded with efficient safety and security features.