The Promise of ART Augmented Reality Technology in Transforming Banking 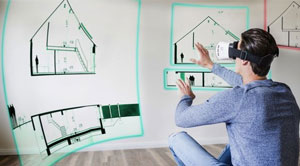 While we thought that the sudden emergence of 3D displays from nowhere in science fiction movies was mere fiction, the Augmented Reality Technology has changed that idea. Although debuted in 1968, this technology came to common man’s notice only in 2014, with Google Glass, followed by several others like the Microsoft Hololens, Snapchat camera filters, and Magic Leap One headset to mention a few. It was around the same time that banks began to prepare themselves to embrace the technology.

If there is anything that has the power to bring banking to your drawing room, it is ART, which adds graphics, sounds, and touch feedback into the real world, creating an enhanced user experience.

The consumer experiences can be elevated in several ways using the four variants. “Marker-based” is like a QR or 2D code which triggers an event/provides specific data when scanned by a reader; “markerless” is where GPS/digital compass is embedded as a feature to provide data. Projecting light to an outside surface and altering the projection to get input is “projection based.” “Superimposition based” is where the augmented picture partially or fully replaces a picture, post the object detection.

Today, customers can just scan at shops with their mobile camera and locate the best deals around them, or even locate an ATM. Similarly, with home financing apps, banks enable a customer to scan a property that he/she may buy, and the application can give details like past sales history, reviews, and current property listings.

ART in banking needs to move ahead of simply making available the past data. A lot more possibilities can be achieved if only the technology teams up with a few others like analytics and artificial intelligence (AI). AR can redefine future customer experience with the power of visualizing using 3D projection clubbed with the real world.  ART has the potential to give that level of insight on the banking operations right into the boardrooms. With superimpositions on to the actual field, end-client trainings can be improved. Banking ads can be broadcasted right on top of cricket or football grounds spatially. There are endless possibilities, and before it’s too late, banks and solution providers must join the ART community.