The Return of Television in the Modern Age of Technology 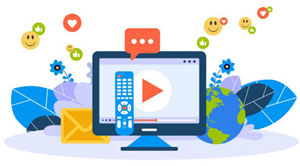 Television has stood the test of time co-opting discoveries that threatened disruption such as VHS, cable networks, and the Internet. Despite its lasting dominance, television’s viability is at a crucial juncture due to the rise of Over-the-Top (OTT) video platforms, streaming content directly to audiences via the public Internet. OTT streaming such as Netflix, Amazon prime took over pay TV subscriptions with average daily broadcast TV viewership continuing its decline. Audience expectations continue to evolve in the present era. Traditional television faces severe challenges unless it reinvents itself.

Television has become a mainstay in most households around the world. Traditional pay TV models offer a bundle of channels at a moderately high price for long commitment periods. Online and mobile viewers enjoy the freedom to pick and choose from a variety of services often at low-to-no cost with availability across multiple devices. Television broadcasters have been swift to adopt OTT and other video-on-demand (VOD) models, but many have struggled to compete efficiently against the native digital video platforms. The most thriving broadcasters are using online and mobile television to expand their traditional offerings and to cater to the evolving requirements of audiences and advertisers.

Emerging technologies like artificial intelligence (AI) and 5G mobile networks are also proposing possibilities for traditional television’s return. augmented and virtual reality elevate the viewing occurrence to provide further immersive viewing, offering audiences a higher degree of control over the entire experience. AI can help broadcasters to automate existing workflows driving down operating expenses while enabling innovation and efficiencies in audience insight. It is essential for broadcasters to expand offerings by ensuring that the quality of the viewing experience is maintained, across online and mobile devices.

Industry changes amidst new technologies, the evolution of audience tastes, and television at its core must retain focus making shows that the audience wants to watch. The allure of good content will continuously be the principal driver for both the viewers and the TV innovators. Traditional television players have endured many threats in the past by maintaining this focus and co-opting the best of the technology innovations. It must adapt once more in response to perhaps the most robust set of difficulties it has ever faced.