The Various Types of Cloud Deployment Models: Which One Should You Choose? 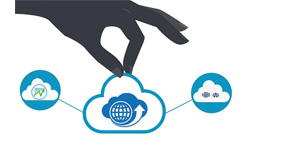 “I don’t need a hard disk in my computer if I can get to the server faster; carrying around these non-connected computers is byzantine by comparison.”— The late Apple CEO Steve Jobs had said, back in 1997. Fast forward to 2016, and contemporary organizations have grown accustomed to leveraging the cloud in order to reduce capital expenditure as well as keeping operating costs under check. For today’s businesses, the decision to move to the cloud is a matter of weighing up the cost benefits and workforce flexibility with the security and privacy concerns.

However, moving to the cloud brings with it its own conundrum that spreads further than assessing the security risk management and cost-reduction capabilities. Over time, an extensive ecosystem of cloud providers, users, and technologies have coalesced around various cloud models, but the sheer the number of options to choose from in tools and approaches to make this happen can be often overwhelming. This has made it imperative for upper management teams of enterprises to recognize the needs of their businesses before opting to deploy a cloud model.

Below listed are the four most common cloud deployment models in use today along with the suitable scenarios to opt for each:

“The cloud services companies of all sizes, the cloud is for everyone. The cloud is a democracy.”— Marc Benioff, CEO, Salesforce.

Most companies today use the public cloud to host applications that allow employees to better efficiency in some form of the other by increasing accessibility and accountability of their real-time data interpretations. A public cloud is the most standard as well as popular cloud computing model via which a cloud service provider makes available most of the requisite resources like applications and storage, available to enterprise users over the web. Public cloud models are sometimes free, with limited usage capabilities or can be offered by providers on a pay-per-use policy.

Often referred to as the ‘true cloud’ hosting model, under this model, users are provided access to services and infrastructure by providers, either for free or on flexible pay-per-use licensing. Google, Salesforce, Microsoft, Yahoo, Zoho, Amazon and Rackspace are the major vendors in this domain.

In general, Public Cloud deployment can be ideal for small and medium-sized enterprises that do not possess any Quality Assurance infrastructure but have short- term testing requirements. Businesses that are required to manage spikes in loads, host SaaS (Software as a Service) applications, leverage short-term infrastructure requirements to develop and test, as well as ones who manage applications operated by manifold end-users, would be best suited for this deployment model, as it curbs the extensive infrastructure investment required.

Uniquely owned by a single enterprise, the private cloud model doesn’t allow much cost efficiency, as it is relatable to purchasing, developing and administering one’s own infrastructure. But by affording its own infrastructure, private clouds centralize access to various resources that can be utilized by users in different geographical locations or different departments of an organization. It brings in terrific security value for a firm, as safety concerns are tackled via secure-access VPN or the material location inside a client’s firewall system. The administration of a private cloud can be carried out by staff positioned inside an organization or it can be outsourced.

Private Cloud deployment is suitable only for enterprises that are willing to invest in virtualization, SAN storage and cloud management software including server class machines to monitor the cloud resource pool. Organizations that already have adequate hardware that meets their Quality Assurance requirements but is still underutilized could be deemed to fit the ideal deployment scenario for this model. Mostly, this encompasses large enterprises, but small and medium-sized companies that have long-term QA goals to meet, could also find investing in a private cloud profitable over time.

A community cloud shares similar characteristics to a public cloud with its differentiating feature being that its access is limited to a precise community or communities who end up being its end-users. The cloud as such, may be jointly or completely owned by a specific community or communities, or even by a third-party vendor that provides cloud services with limited access. All the members associated with a community cloud share the responsibility of defining the progression of the cloud environment. However, it is important to remember that being a member of a cloud community does not necessarily allow access to all of the cloud's functionalities, and non-members are generally not permitted within, unless allowed to join by a member of the community.

Several organizations that have the same cloud infrastructure if they have the similar policy and compliance regulations can opt for a community cloud deployment model as it will help in sharing of all the operational as well as overhead costs divided among a larger group, compared to a private cloud deployment. Currently, state-level federal departments that need access to the identical data relating to neighboring population, or infrastructure related queries like roads, hospitals, etc leverage community clouds to manage applications and data. In-depth recognition of the level of support required and the criticality of the information should be considered before investing in such a model.

“The biggest trend we see is people now understand that it's a hybrid world. Everything you do is hybrid. Even if you use public cloud, if it's somehow tied in to a private application you're running, that's a hybrid environment. In many cases, enterprises are running hybrid clouds without actually knowing it,” said Saar Gillai, GM, HP.

A hybrid cloud consists of two or more different types of cloud deployment models—public, private or community, which remains a unique entity within itself, but is bound together by uniform technologies that facilitate data and application portability. Hybrid cloud leverages the benefits of the other cloud models to create a customized environment that suits the specific needs of an organization. As such, this model allows enterprises to take advantage of secure applications as well as data that is hosted on a private cloud, whilst achieving cost benefits by keeping shared information on the public cloud. The model also comes in handy where organizations require an instance of cloud bursting—an application deployment model by which an application is able to run in a private cloud but can ‘burst’ into a public cloud when the demand is on a surge. This is often done when the existing private cloud infrastructure of an organization is not able to handle load spikes and requires assistance.

Organizations that own their own QA hardware, but cannot completely manage the future QA demands with their available hardware assets can be deemed suitable for hybrid cloud deployment. Also, organizations with the ability to handle the bulk of their long term infrastructure needs within their own private clouds but have certain short-term needs which can be handled via a public cloud might find deploying this model worthwhile.