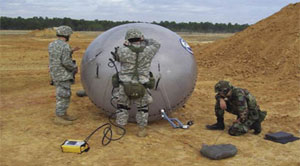 The approval of GATR’s Inflatable Satellite Communications (SATCOM) Antenna was officially made with an initial order of thirty-six (36) 2.4-meter X- and Ku-band terminals to support its Radio and Intelligence Battalions.

Including drastic reduction in weight, GATR’s deployment enables a 2.4-meter aperture antenna to pack into airline-checkable transit cases. The new program also replaces the TROJAN solution for the HBSI-PT and will now be using the ISA, which was selected to help achieve the mission of MARCORSYSCOM’s Program Manager Marine Air Ground Task Force (MAGTF) Communications Command & Control (PM MC3) to ‘Lighten the MAGTF’.