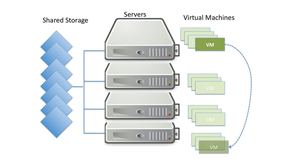 The virtualization landscape has seen several changes in the recent years and the debate still rages on over the primacy of block vs. file-based access for Hyper-V and VMware storage. Unified storage has come to the rescue with its option to run and manage applications from a single device. Unifying Storage Area Network (SAN) and Network-Attached Storage (NAS), a unified storage system could be used for file or block storage based on user requirements. Unified storage may be defined as a storage system that is able to provide storage access at block level and file level.

It’s not about establishing the superiority of one over the other and there’s no need to worry about how to use NAS and pit it against SAN. It can be done with one single device. And all you have is a single set of management efficacies that will help you manage the unified storage array, and make it easier to manage virtual machines.

The challenge stems from the fact that, like most all-in-one types of appliances, not only do you derive positives from the best of both worlds, but, there are times when you will also have to face the brunt. If you need high performance, you'll probably be better off with a SAN system where it’s easy to deliver the kind of performance that is required. And, if you have a large number of files to deal with, then it’s better to go with a scale-out NAS system rather than trying to do both.

• There’s a need for shared access among hypervisor hosts, so that nothing untoward happens in the case of a server failure and the load is distributed among various servers and virtual machines.

• Virtual server environments comprise of hundreds of virtual servers and machines. This implies any storage solution needs to be scalable in order to cater to the large amount of data generated by virtual machines.

With the rapid growth of unstructured data in the recent years, it has become a primary concern for enterprises before implementing platforms. When we start mixing the unstructured NAS data with the block data, a need arises to accommodate both the data sets. There’s a need to constantly monitor the unstructured data so that the user doesn’t hit a roadblock in terms of space. Another aspect that should be taken into account is performance. The most important aspect of unified storage is that one should carefully monitor the two sets of data and how they interact with each other. There’s a basic difference between file and block-level data. Block-level data, which is made of shorter bits of data usually, has shorter access times. File-level data is usually more random and can't take advantage of locality of reference. Thus one should be careful enough to deal with these challenges and try to create a synergy between the two.

The main advantage of using a unified storage is the fact that unified storage combines two kinds of storage architectures to handle multiple operations at the same time. With unified storage, many of the file storage limitations and block storage are solved. If a NAS and a SAN co-exist in a network, it requires two sets of different approaches to manage the systems, which is not the case with a unified storage.

Henceforth, the choice of platform should be considered according to the company’s that may include ease of use, scalability, performance monitoring and management of virtual servers. There is no reason why a file or block-based approach can’t co-exist in peace under one roof and there is every chance that both will live in perfect harmony and cater to the needs of server virtualization for many years to come.