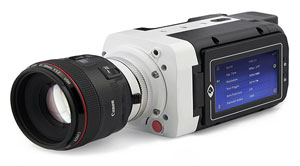 “The new LAB-Series was built to meet the specific needs of researchers and engineers that conduct high-speed imaging within an office-like setting. With the LAB-Series, we’ve combined simplicity and ease-of-use with the unmatched, high-performance capabilities expected of a Phantom camera,” says Rick Robinson, Director of Marketing,Vision Research. The LAB series is explicitly developed for laboratory and office settings where the camera is connected to a computer for storage, control, and image analysis.

Bestowing the choice of camera model upon the user, the series offers seven different performance levelsdepending on the image resolution and acquisition speed which ranges from 1Mpx Miro LAB110 to the 4Mpx Miro LAB340. The maximum resolution ranges from 1280x800 to 2560x1600 with maximum frames per second ranging from 410 to 1850.

The LAB-Series incorporates standard RJ-45 Ethernet connector and standard BNC connections for signaling enabling direct connection to a computer in a lab environment. This helps the users to save, view and analyze their high-speed cines. In addition, the Miro LAB-Series cameras provides options for using CineFlash non-volatile data storage system allowing users to conveniently save multiple cine files on-camera in non-volatile memory for later retrieval.