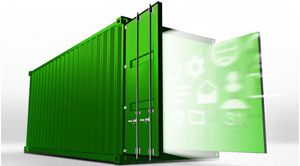 SAN FRANCISCO, CA: VMware is looking forward to enable enterprises to run applications in a container, or a virtual machine, or a container within a virtual machine by leveraging its existing VMware infrastructure. And in this regard, the company has joined forces with companies such as Docker, Google and Pivotal who have made significant development and implementation of containers.

Containerized applications of the enterprises could be run on VMware infrastructure nullifying the need to build separate infrastructure silos for their container initiatives. A common platform for containerization and virtualization would give developers with agility and speed, and provides IT teams with more control over the enterprise environment.

Running containers within virtual machines on- or off- premises in an enterprise yields high performance, security isolation, dynamic virtual networking, software-defined storage and a host of third-party products built for virtual machines.

VMware’s collaboration with Docker, Google, and Pivotal is based on building several technological advancements such as: enabling Docker Engine on VMware workflows from build to deploy for VMware Sphere to VMware vCloud Air; working on Docker-related open source projects libswarm, libcontainer and libchan; exploring areas of interoperability between Docker and VMware infrastructure and products; being a new entrant into the Kubernetes community, VMware will make Kubernetes' patterns, APIs and tools available to enterprises.

Google and VMware are joining forces to enable multi-cloud integration of Kubernetes by bringing the pod based networking model of Open vSwitch. VMware has already provided the code to bring Kubernetes to VMware vSphere for enterprises to work with container management.

Pivotal, Docker, and VMware will together work on enhancing the Docker libcontainer project with capabilities from Warden, a Linux Container technology originally developed at VMware for Cloud Foundry.

"With Docker, Google and Pivotal, we will simplify the way enterprises develop, run and manage all application types on a common platform at scale," said Ben Fathi, chief technology officer, VMware. "In this way, Docker containers and virtual machines will provide an IT environment without compromise. Together, we will optimize containers for the enterprise -- enabling that they run effectively in software-defined data center environments."