vSphere 6.0 Essentials for a Storage Administrator 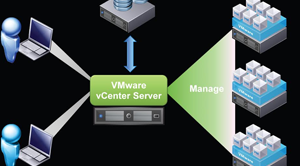 As time is changing so are physical systems getting converted to virtualized systems. Recently, Gartner in its Magic Quadrant for x86 Virtualization Infrastructures has placed VMware into Leader’s position along with Microsoft. VMware hypervisor (ESXi) has been widely used for virtualization with the release of their sever virtualization software, vSphere 6.0. Here are some of the enhancements in VMware ESXi 6.0 that helps storage administrators to optimize vSphere for virtualized data storage:

Scalability: Since the adoption of virtualization in the IT enivornments, new updates and innovations in virtualization have improved and enhanced hypervisor capabilities. Now database administrators need not worry about the scalability issues as VMware ESXi 6.0 extends its host capacity to 64; the previous versions supported 32 hosts. With such an improved capacity, vSphere can now support 8,000 VMs in a single cluster. Additionally, vSphere 6.0 can manage 480 logical CPUs with RAM of 12TB.

Security: A CIO should know the level of security the hypervisors are using while managing and controlling virtualization machines (VMs). Hypervisors enables the user to modify, edit and update the data in VMs and chances of VMs being compromised or loss of data are high. Also the security guidelines designed to customize user’s access to VMs makes a huge impact as corporate data is involved. To strengthen security, VMware have added a two lockdown mode—‘Normal lockdown mode’, where users can access Direct Console User Interface (DCUI) and the second mode is ‘Strict lockdown mode’ where access to communicate with the host locally is stopped.

VM Enhancements: This new release has brought with it a new compatibility level when compared with its previous versions. It supports 128 vCPUs and has hot-add RAM enhancements for Virtual Non-uniform Memory Access (vNUMA). In this version, all the regions of vNUMA are benefitted from the increase in RAM which in the previous case was only dedicated to region 0. This helps to improve the overall performance of the VM and also reduces its downtime.

vSphere 6.0 has been provided with removable serial and parallel ports, where the serial port is 32. The extended number of ports can help many enterprises using vSphere 6.0. For instance, a Point-of-Sale (POS) system requires large number of serial ports and with vSphere 6.0 an enterprise can overcome limitations in POS systems.

The new release is built to offer better flexibility with an enhanced vMotion capability, enabling live migration of VMs across virtual switches along a distance of 150ms RTT. Whereas in previous version of vSphere, vMotion capabilities were restricted to a single vCentre server system. vSphere 6.0 is also designed to be redundant enough in withstanding physical server failures. This is accomplished with the help of VMware vSphere Fault Tolerance Enhancements (vSphere FT). This enhancement creates a replica of VMs which are updated in the primary storage. In the previous version of vSphere FT only single vCPU was supported by the system. In new release, vSphere FT supports up to four vCPUs and 64 GB of memory.

Storage Enhancements: The introduction of virtual volumes onto the vSphere 6.0 aligns Storage Area Network (SAN) and Network Attached Storage (NAS) systems with VMs. This new addition of virtual volumes enables the data administrators to manage the SAN and NAS at VM level using native array capabilities. To automate the allocation and management of storage-related services with some machine storage policy, Storage Policy-based Management (SPBM) is leveraged. Virtual volumes eliminate the use of Logical Unit Numbers (LUNs) per host. Also, SPBM ensures compliance regarding datastores for VMs and vSphere administrators can specify a set of storage requirements and capabilities for particular VMs, defining the service levels required by hosted applications.

Networking Enhancements: Multitenancy has proven to be cost efficient as myriad tenants use single bandwidth but with have different Service Level Agreements (SLAs) for their VMs. The new VMware ESXi 6.0 mitigates the effects of multitenancy i.e. it assures the SLAs to secure the corporate data privacy. Further, vSphere 6.0 brings-in multiple TCP/IP stacks which have its in-built memory heap, ARP table, routing table, and default gateway. This networking capability enhances vMotion, replication operations over the network.

Along with these enhancements, VMware vSphere 6.0 has a second update in which Ethernet can support 25G and 50G link speeds, the product supports VMware Host Client HTML5. Additionally, an update on storage is also embedded with the ESXi 6.0 update 2 which the VMware Virtual SAN 6.2. Additionally, vSphere can now support IO Filter VASA provider and VMIOF versions that helps the storage administrators to enhance storage APIs.