Will Robots take over humans? 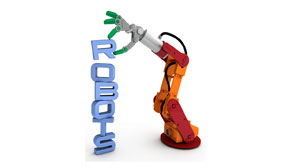 AI, machine learning and robotics are evolving rapidly creating questions as whether in future robots will take over humans or not. Right now, robots are performing thousands of tasks and they have spread throughout the world. The idea of creating robots had driven by the idea of accomplishing the works, man cannot do. And today robots have reached at some of the corners that human cannot.

As technologies today are more and more of a part in our everyday life industries cannot constraint themselves from the moaning of the rise of AI or machine learning or robotics. It is not only domains that have repetitive tasks, has been impacted, but AI is taking over some of the white collar jobs as medicines, teaching, journalism and many more. Robots are probing solar system for signs of life, building cars motors at the motor plants, making milkshakes in the kitchens or defusing bombs. There are robot astronauts, soldiers are replaced by drones and robot soldiers.

AI, machine learning and robotics technologies are evidently impacting the sales and marketing sector in a remarkable way. The robot has transformed industrial manufacturing, food production and restaurant kitchens are the next big thing, which will be rolled out by robots. Today’s marketing needs handling billions of data and taking quick decisions every day which becomes almost impossible for the human to handle with maintaining perfection. On the other hand, machines are capable of processing uncountable data and analyze complicated patterns in a second.

Robots vs human dilemma: It is difficult to predict how AI or Robots will function in the near future. Machines are best at performing mundane, repetitive works, catching patterns, and quick decision-making tasks. Also at present robots are taking over the human in making big machines or surgeries or in fighting enemies but there are many fields human cannot be replaced in. As artistic jobs that need creativity or imagination or compassionate jobs of doctors and nurses in hospitals which need care and connectivity with patients or other complex jobs for which the robots are not compatible enough. Some sectors as teaching which need experience and judgment, robots are not capable to deliver it yet. Humans are still ahead of Robots with more skills that are not limited to a few areas.