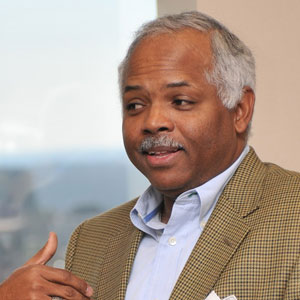 Greg Morrison is senior vice president and chief information officer for Cox Enterprises. He oversees the technology service and strategy development for all corporate systems. In addition, he is responsible for enhancing the IT infrastructure to support business expansion and ensure consistent service levels and operational reliability across the enterprise.

Prior to joining Prudential, Morrison served in the United States Army Signal Corps for seven years.

He serves on the board of trustees for Clark Atlanta University and on the board of directors for Piedmont Healthcare Systems, Gwinnett Technical College and Presbyterian Homes of Georgia. He was named one of US Black Engineer Magazine's Most Important Blacks in Technology for nine consecutive years (2005-2013), as well as Computerworld Magazine's Premier 100 IT Leaders. Morrison also received the Epsilon Award for Career Achievement from the National Black Data Processing Associates (BDPA) organization.  Business to Business Magazine named him an IMPACT Leader for his commitment to the community, and he was inducted into the Public Education Foundation of Moore County’s Hall of Fame.

Digital Innovation Giving Rise to New Capabilities
Advancing Innovation Capabilities IT organizations have historically focused on standardizing, consolidating and outsourcing—essentially cost containing internal IT systems. Coming out of the economic recession of 2008 you had little choice but to focus here. During the past couple of years, more business leaders have started to realize that digital disruptions...