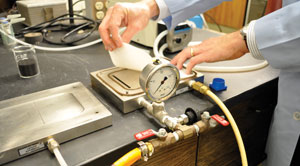 Customized membranes are developed by CMS to simplify the separation process utilized in refineries and petrochemical plants. Membrane systems have the capability to provide less energy- and capital intensive alternatives as compared to the olefin-paraffin method of separations which requires more capital- and energy-intensive distillation processes. Moreover membranes modularity and scalability provides flexibility to the capacity without committing to construct a new distillation column.

CMS has constructed highly efficient, durable membranes utilizing perfluoropolymer material that delivers high purity olefins streams to the customers. Breaking the monotony from the prior efforts to evolve the membranes, the CMS material has shown maximum durability of more than 300 days in laboratory tests that can withstand poisons such as acetylene, hydrogen and hydrogen sulfide.

The pilot presentation scheduled at the PBF refinery is the first on-site test of the material and is scheduled to take place at 2H, 2016. The motive behind the testing is to showcase the usage of membranes in segregation of C3 compounds in a process stream. The test will be conducted with full transparency and under constant observation. PBF is contributing in the designing and building process of the test rig. It promises maximum effort from both the companies to drive safe operations in the workflow.

Erica Nemser, CEO, CMS summarizes, "CMS is proud to be at the leading edge of bringing innovative and transformational technology to the marketplace -- fundamentally changing the way industry provides some of our core building blocks and reducing the energy consumption in one of our biggest sectors."