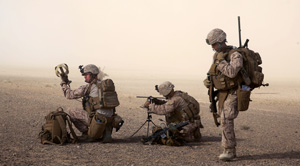 FAIRFAX, VA: A war is won by soldiers, by weapons, by great leaders and their tactical brilliance, but one aspect which remains supremely critical is communication. Wars have been won and lost because of communication, be it miscommunication or even the lack of communication. Millions of lives hinge on this one facet and General Dynamics Mission Systems understands its importance.

General Dynamics Mission Systems and two other firms have now entered into a convention with the government to deliver 30 next-generation, two-channel Manpack networking radios to the U.S. Army. The new version is expected to be lighter and more powerful than its predecessor - AN/PRC-155, which is currently being fielded to the 101st Airborne Division (Air Assault), 82nd Airborne Division and 10th Mountain Division.

“We have delivered more than 5,000 AN/PRC-155 Manpack networking radios to the Army and have heard first-hand what soldiers want in a next-generation radio. Their ideas and our commitment to advanced engineering, technology and cost-effective manufacturing will ensure that soldiers and their commanders will be able to securely talk, text and share information in an increasingly complex tactical environment,” says Bill Ross, VP, General Dynamics Mission Systems.

The new version is touted to be much more robust and highly capable even in rugged terrains.