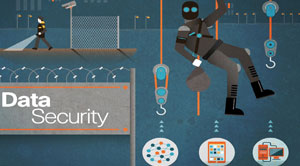 Dispersive Storage tool contains a client which is an edge device to save data, a Network Storage Device and a Shuffling Server. It is a software tool which divides data into small blocks as small as 1kband spread these blocks across multiple storage devices to prevent data theft, malware insertion and blocks unauthorized manipulation of stored data. The data can be reassembled when needed.

Dispersive Virtualized Networks (VNs)- the virtualized routing platforms can be used instead of private networks to deliver data with greater speed, tighter security and more reliability and it uses single or combination of physical connections to the internet in which path selection is continuously changing and message encryption varies from path to path. These independent paths are based on the factors like Bandwidth availability, Line quality and measured time delay on each independent packet stream.

The locations of the stored data are periodically shuffled; Dispersive Storage which is supposed to be available by later this year poses ability to curtail random bytes from storage points and leverage them to form a dynamic key that changes with each shuffling. "This feature introduces a novel approach to combat the ever present and increasingly aggressive and sophisticated cyber threat," says Robert W. Twitchell, Jr, President and CEO, Dispersive Technologies.

“Our software works with all existing infrastructure, runs on commodity hardware, and enables the use of lower-cost bandwidth, these improvements in security and performance are typically achieved at a lower total cost," says Twitchell.